It's been a while since we have flown a new airline or visited a new airport (Air Astana in-country travel excepted).  So let's talk about Austrian Airlines and Vienna airport.

Austrian Air: In our four legs, every flight attendant was helpful and friendly. On each plane Alex and Zoltan were offered a package of coloring, gummy bears, and various games. We now have for our travel stash a mini Connect-4, two packs of mini colored pencils, two decks of cards that are a matching game on the other side, and another card game that doubles as info sheets on about 40-50 different airplanes (photos, wingspan, maximum weight etc).  The food was as good as in-flight food gets.  And, the best of all - this being a bit of a slow travel season the planes were relatively empty. On our awful return flight home (depart 8pm, arrive 6am due to time zones and travel time) every family member got a full 3-seat row in which to stretch out and even Alex slept a couple of hours! It was our first landing-luggage-passport control experience without any exhaustion-inspired tantrums! 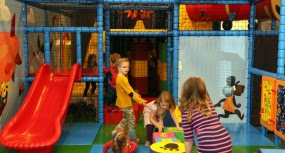 Vienna Airport: Family. Fun. Gate.  My only beef is that it is only available to those in the Schengen zone. I sincerely hope that the construction going on right next to the "family zone" in the non-Schengen area will one day be a complementary play area. It is essentially a soft-toy playground, with slides, obstacle course run over different levels, foam blocks, foam see-saw, and even a rock climbing wall.  Even the walls are entertaining, one is a "where's Waldo" type finding scene, one has the history of aviation or something like that. All over the airport are these seating pods, I don't know how to describe them but they are like couches joined to make a solid rectangle, all soft and padded and beautifully designed for resting or napping. In fact, during one of our turns in the play zone we saw a kid asleep on the thing while a sibling played. In other parts of the airports we saw adults sleeping on them. It was remarkably quick and easy to get around the airport, even with having to go through security and passport control moving between Schengen and non areas.  When I asked whether there was any milk in the pretzel (just in case, you know), the lady in the cafe consulted some code on the frame the pretzels hung from, then showed me a card with all the different allergens and their codes and it turns out pretzels only have wheat/gluten :-)
Posted by Lynne at 5:01 AM