Alex had a follow up appointment at CHOP, which I had deliberately scheduled for midafternoon, not knowing where we'd be coming from 6 weeks ago. I had figured the whole family would go and we'd spend some time in Philly, a place so meaningful to Terry and me but where Zoltan has never been - other than as a fetus, which doesn't count.

We ended up deciding to cash in some Marriott points and stay overnight to soak in more of the city, and got a fabulous room overlooking City Hall. I have to put in some props for Marriott, this is the 2nd time we've stayed in one recently and they have great customer service.

We also decided to increase the stress-free quotient of the trip and ditch the car at the nearest regional rail station and take the train into town. Bonus that the kids love trains and we ended up in a nearly empty first car where the kids could watch the man (engineer?) drive the train.

After dropping the bags at the hotel we hit Reading Terminal Market, where Terry satisfied his craving for DiNic's sandwiches and I got me some Sang Kee duck. A quick stop for fresh produce at the Iovine Brothers market for our fruit bat children, and we were set. Mmmm, Philly food, how we have missed you! 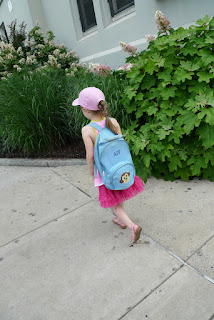 Alex and I had to head to CHOP for her follow up visit and the boys went down for naps. I have been meaning to snap some photos of the hospital, it really does look like what you'd expect a world class children's hospital to look like (i.e., very child friendly). 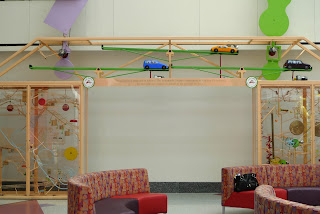 These interesting bell sculptures are right on the walk from the metro to the hospital and something else I've been meaning to photograph. 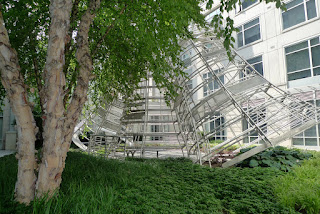 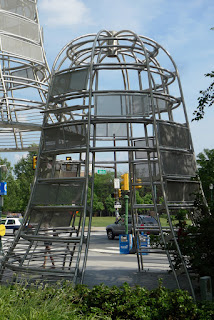 Before we got back to the hotel room the boys ran out for a bit to the LOVE statue and fountain (Zoltan's exuberant "I want to go to the fontanka!" was often heard these 36 or so hours).

The only less-than-perfect event of the day was when we ventured for Indian food that was metro-able (Malik's, alas, is not, but we have not forgotten you!). The place we intended to patronize turned out to be closed, so we went around the corner to another place we knew existed. All the vegetarian dishes were delicious, but the butter chicken was inedible, the tandoori chicken nothing special, and the goat curry tender but not very flavorful. When what you're really craving is butter chicken, a meal like this doesn't really ease the craving.
Posted by Lynne at 11:15 PM