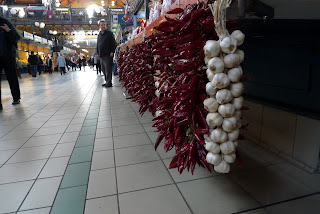 We weren't sure how the kids would handle the time change, the disruption to their schedules and surroundings, and the general aftereffects of travel, so we planned Sunday to be a lazy day. Good thing, as Zoltan woke around 2am totally pissed off and only slept lying on top of one of us, like back in the old days (aka from 4 weeks to 3 months old). He eventually slid off and went into the ubiquitous H formation we keep hearing about - never sleeping with our kids means we haven't experienced this fun aspect of parenting, the "being pushed out of bed by a creature the size of one's arm."

We got up for good around 7am, and made a big pot of coffee. I had to run out for sugar and to discover what the Sunday hours of the local grocery store were. Interestingly, the Swiss embassy is on one side of this apartment building, the Iranian and Italian are within 3 houses of the other side, and Libya is on the corner. Tells you something about the neighborhood.

Our first day we met our friend and went for lunch, having Hungarian food for my first time. Yummy! The extra special bonus at lunch was the table next to us, where a lady first entertained Z by playing peekaboo, and finally held out her arms for him so I could eat some of my food. I love her.

The second day was Market day. The big indoor produce market is closed on Sundays but we love markets and needed fruit for the kids anyway so off we went Monday morning. This one is more touristy than some other one Terry heard of, but we still managed to drool over reasonably priced beautiful produce. We got bread and cheese and strawberries for an immediate snack (eaten at the playground across the street as the kids played, running up to us for one more berry and then back to whatever they were doing) and replenished our exhausted stock of paprika. Turns out there's 5 kinds of paprika and smoked paprika is only used on steaks. In case anyone needs to know.

When we got home from the market I tried to get Alex to nap while Terry explored the park with Zoltan. More on that next.
Posted by Lynne at 12:45 PM