The last post foreshadowed this one.  They say if you state publicly something you want to do, it creates more accountability and makes it more likely you'll stick with it.  I have been thinking about what I want for the next year. This is actually pretty tame, but I am hoping by starting I'll get momentum going to continue after I hit the goals.  So here goes:

4. One work day taken off each ski season month to go midweek skiing

5. Once a month do something new - see a show, explore a neighborhood, try a new farmer's market, something that I haven't done yet.

6. I've printed out my 1000 Hours Outside tracker and want to see how far I get

[edited to add] 7. One night hike with the family - get some use out of those headlamps! 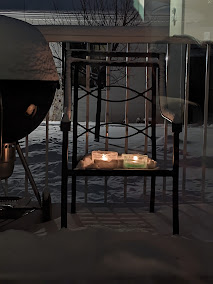 Planning my new year goals and one is to get out of my rut. Try new things again. Lockdown has really gotten me out of the habit, even though one of my favorite things is totally COVID-OK - exploring new neighborhoods (Calgary is pretty low density so there are very few pockets where you have to be within 6 feet of someone on the sidewalk).

One thing I'd read about and wanted to try is making ice lanterns.  Basically you partly fill a container with water, then stick inside of it a smaller container to make the insert where a tea light will go, and set it outside to freeze.  I put one together, and then thought about coloring the second one. It turns out that food coloring will condense in the cold so it's a stronger pocket of green at the bottom surrounded by clear-ish water.  I've also seen examples where people put greenery and berries in the water before freezing. I have lots of ideas now.

The other thing is food. We have complained, well, more than we should have about the restaurant scene here.  Our trip to Vancouver inspired me to look for some of the things we ate there. Tonight it was hand pulled noodles.  We got the fried noodles that we knew the kids would like and a noodle soup for the adults. We got it spicy - the restaurant actually sells its chili oil, which I think Terry plans to buy next time. It was delicious and spicy. I kept coughing and my nose was running. Probably not the best scene in COVID times, oh well.  It bears repeating - it was delicious and spicy.  The kids tried sesame balls with sweet bean paste inside and liked it enough that we ordered a second round. The house tea was also exceptional. I have no idea what was in it - I think goji berries, peach flower, maybe chamomile, maybe chrysanthemum, I think some rose hips .... definitely honey but somehow the sweetness continued through several refillings with hot water.

Anyway, it has fueled my desire to do more exploring.

#29. I am thankful for our amazing landlord. We really won the lottery with him.

#30. And I am thankful that he isn't selling the house so we can continue to live here for 3 more years!

#25. I m grateful for the COVID vaccine. I would never have volunteered to wade into tents filled with thousands of evacuees – nor take the flights required to even get there – if I didn’t have that bit of security.

#26. I am grateful I get to spend more summer in Calgary. Mountains and hoodoos to climb, and to admire views from. Rivers and lakes with colors so deep Alex swears they have been dyed. Camping in the mountains and experiencing freezing temperatures in the tent. S’mores over the campfire. Moose, bear, fox, the adorable little beaver swimming with its little stick.

#27. I am grateful that we actually managed to score the campsites we were most intent on getting last summer: Dinosaur Park (climbing hoodoos!) and Two Jack Lake (canoe!). We did not clear the bucket list; there will be plenty more campsites we are waiting online like concert tickets to score.

#28. I am grateful for libraries. They are so much more than only places that have books, but even if that’s all they were, it would be enough (dayainu).

#21.  In a very generalistic, vague picture of reality, I'll explain that most of my days are spent trying to teach, coach and convince colleagues that disability rights is an important topic in foreign policy, and that physical and communications accessibility is worth the effort and possible inconvenience.  That often takes form as reviewing and editing speeches that senior diplomats will make to large crowds and to intimate gatherings.  I am grateful and even joyous every time I open a document to review and either the points I would have added are already in the original remarks, or that some other ally has already added them.  Over the last two years I have seen tangible progress and I am so grateful to be in this position, doing this work.

#22.  I am thankful that we were able to score the last, frozen, free range turkey from the butcher we frequent; local Thanksgiving was 6 weeks ago and Christmas turkeys aren't full size yet.

#23.  I am so grateful that Zoltan fits so well into his new school. He's thriving. And even more grateful he gets to stay.

#24. I am grateful to Terry for building me two bird feeders during the first COVID summer, one I can see from my desk and one in the back yard. It is such a delight to lift my eyes from the computer screen and watch the chickadees grab a bunch of seed and move through the pine tree bough, caching it (for the magpies later to steal. Circle of life.The feeder is too small for them to perch so that is also entertainment when they try.)

#16. I am grateful for all the luck in my life.  My socio-economic background, skin color, and education level - none of which are things I could have chosen for myself - have given me opportunities and protections that are not available to others.  There's a responsibility in that.

#17. Related to the above, I am grateful to be comfortable enough that I can use purchasing power to support my values - I don't have to pay attention to what always costs less. Did I buy a holiday gift for one of the kids last week that cost about 15% more in the independent store than it would have on amazon? Sure did. Not having to work multiple jobs to get by also means I had the time to go to that store.

#18.  I think I already wrote this but it can't be said enough - I am so grateful to be able to stay in Calgary. Especially as the kids seem to be more comfortable here than they have been anywhere else.

#19. I am grateful for winter in Calgary and all the cherished memories already made and the ones to be made. Rivers to hike – with ice cleats secure on my feet – to frozen waterfalls. Powdery snow to ski upon. Night sledding just a couple of blocks away. Ice skating on the “wild ice” of Two Jack and on the much more moderate ice of Olympic Park.  I am so ready for winter to begin!

#20. I am grateful for our landlord.  He is super relaxed and easygoing, prompt when there's a problem, and seems pretty delighted that we pay on time and don't trash the place. We've had some discussions about whether to look for a different place for our next 3 years here and keep coming back to the idea that (1) Rick is amazing and we've heard many horror stories of other local landlords and (2) the Even Steven principle would indicate it would be our turn for one of those awful landlords if we gave Rick up.

Email ThisBlogThis!Share to TwitterShare to FacebookShare to Pinterest
Labels: Gratitude

#14. I am grateful for the garden.  As I blanch the last of this year's kale, I remember the well-loved line from Blueberries for Sal where the mother goes to pick blueberries "to have food for the winter."  I was surprised how tasty the tomatoes were, given that we picked most of them green the day before the first major frost was expected;  I am eagerly awaiting the finish of fermenting and bottling of the beer Terry made with hops from the community garden.

#15. Today I am grateful for telework - for having a job that enables it, for State for letting me do it. I spent my pandemic productive, safe in my own home, and with the added benefit of being able to throw a load of laundry in the machine during lunchtime. It is also lovely to greet the kids when they come home from school.

#10:  The kids. I am not at all the same person I was before they were born – mostly for the better. They challenge me and push my out of my comfort zone all the time and I am excited to meet the adults they become.  Relatedly, I am grateful that Alex has been mostly delightful for more than six months now; she was always precocious and maybe this is a sign her teenage angst came early?

#11:  Today I am grateful for the military men and women who have volunteered to serve and protect.
#12:  Buy Nothing groups. Your crap is my treasure; my crap is your treasure. Everyone is happy.
#13:  Today Terry finished up the 2 day sourdough bread I started yesterday (no accolades for me; sourdough has been his thing since the pandemic started and I have only begun to take over).  He also had started chicken stock from a few carcasses, some aromatic veggies, and water;  today it became chicken noodle soup.  I went to the farmers market to buy our fourth box of apples (slightly smaller than a bushel); it was turned into applesauce we snacked on this afternoon.  Zoltan made chocolate chip cookies.  I am so grateful for the interest and ability of my family to put together from-scratch delicious food.
Posted by Lynne at 9:50 PM No comments:

#8: Today I am grateful for daylight savings time. I know that isn't popular, but I much prefer Alex biking to school in daylight than in full pitch darkness. Given that clear, dry streets in November is already an unusual gift, by the time it's black in the morning again she'll be bussing anyway.

#9: Grateful for my husband (again).  Today we were both in the office.  Tortilla soup that was meant to be my lunch launched itself across the lunchroom when I tried to remove it from the microwave. I'm talking the bowl flipped in the air and landed, on the ground, upside-down. I had soup on my glasses, my shoes, and all over my person in between. As well as the counter, the floor, the side of the fridge, etc. I looked like I had been vomited upon. Terry gave me his lunch. I assumed he'd treat himself to the yummy Korean restaurant at the ground floor of our building. Nope, he was so busy his lunch was a granola bar and an apple. Now THAT's a grand romantic gesture (one I would never make. The fight I would provoke while hungry would negate any gold stars I'd otherwise accrue).

So I guess this is how it's going to be this year.  Sigh.

Gratitude #5:  My health. Really. It’s a trope in my house that I don’t get sick except about one cold a year. I don’t take this for granted.

Gratitude #6:  My husband. Terry really is my perfect complement. 21 years! Soon our relationship will be older than he was when we met.

Gratitude #7:  Alberta healthcare. Three ER visits in our first year (thankfully none after that, although Terry did break his ankle). We paid a pittance for all that good care. I’ll take my “socialized medicine” any day thank you.