We saw a movie! In the theater!

I read in the St. Petersburg Times (the city's twice weekly English language "newspaper") a review of the movie Melancholia. I noted that it claimed the movie was in English with Russian subtitles. As it was showing at the new movie theater in the Galleria mall, I thought it was certainly plausible.

Terry wanted wings so we were already planning to be in the area, and our babysitter had successfully put Z down to sleep the week before (a test run) so she came pretty early in the evening, and we decided to check out the theater. Turns out there were 3 movies in English and Melancholia looked like the best of the bunch. It was our very first foray into a Russian movie theater and in fact we can't remember a movie seen in the theater since 2007. I was pregnant with Alex at the time.

Terry didn't like the movie, I did, but we both agreed it was a good test run and totally worth paying attention to what movies come to that theater and finding out which will be in English.
Posted by Lynne at 12:18 PM No comments:

Last night, as Terry craved Buffalo wings, we decided to go to the TGI Fridays that recently opened in the Galleria mall. We placed our order, our server repeated it back to us, and yet when the meal came out mine was something completely different. Grrrr.

The manager came over, and in lightening Russian apologized for the mistake and said the corrected dish would come out, if we had the time and could stay, in another 10 minutes. At least, I think that's what he said as I caught about 2 words in each sentence. He repeated himself in English and as we had plenty of time to kill and at that point I really wanted the dish I'd ordered, we decided to wait.

#1: The manager apologized for a problem in our dinner.

Terry and I then got to discussing the manager's possible background, as his English was both excellent and accented American - most Russians speak with a British English accent. When he came over later to ask if the meal was OK and if it came within the time he'd promised, we asked and learned he had studied in Ohio and was never able, later, to shake the Americanisms out of his accent and vocabulary. He and Terry bonded over Cleveland, where both had spent some time. And then ....

#2: He offered a complimentary dessert or cocktail for our inconvenience.

Is Customer Service beginning to migrate into Russia? Will such sightings become more frequent? One can only hope. Stay tuned!
Posted by Lynne at 11:41 PM 2 comments:

The joys of dacha season. 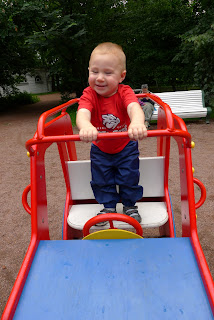 It is really common for Russians to have dachas or summer homes. Dachas I am told will range from glorified gardening shed to palatial homes. Many Russians will head out of town in the summer and spend the weekends at their dacha. One of the many side benefits for us non-dacha people is there are fewer people in the city. Traffic is significantly lighter. This makes going to one of the many parks a bit further out from the center of the city so much easier to do.

Last Sunday after Alex and I make a quick grocery run (also in record time thanks to dacha season), the family piled in the car and went Yelagin Island. Yelagin Island is one of the many islands in the Neva delta. The island is a large park with boat rentals, a small zoo, cafes, and lots of greenery to stroll around in. There was a nice playground there that ended up consuming most of our morning. Zoltan was thrilled to sit in the little car and bounce, while Alex showed us her excellent climbing skills. 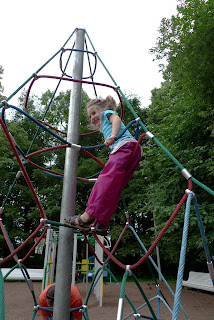 After the kids got out some energy we stopped at a cafe for lunch. During our lunch one of the friendly ducks of the park waddled its way over to our table to get its share of the lunch. Alex was quite excited to share her bread with the duck. Following lunch the weather started to turn toward the rainy side so we headed back home to beat the rain and get the kids down for naps.

Thanks to the wonderful traffic during the summer we were home in no time and both children got their naps.

* Edited to add: we returned this Saturday for a lengthier tour of the island, once again transiting in record time. Useful to know is that if you get there early enough on the weekend, the usual entrance fee is not collected.
Posted by Terry at 2:24 PM No comments:

Our GSO is sooo fabulous to get recycling, finally. Now I have to remember not to throw away the Mac N Cheese box, because I can bring it into the Consulate and drop it in the bin. Life just got a bit better :) 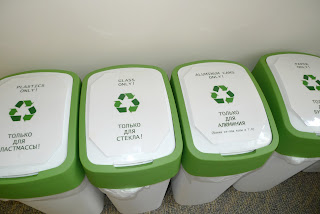 Friday was one of those dragging days, when no amount of coffee can make up for the desperate urge for a nap. Zoltan went down for his nap surprisingly easily, given that for several months he refused to lay down and go to bed when I put him down. The time it took to get Alex ready and down for her nap, then wait 10 minutes for the movers to arrive to take away the boxes from UAB, and have a drink of water ... Z was up and nothing would convince him to go back down. Totally poopalicious nap, and totally grumpy mommy. Turns out, with the lack of sleep, totally grumpy baby.

Grumpy babies need a lot of stimulation to keep from crying and tired grumpy mommies don't have a lot in us to keep things fresh. I managed to play with him for about an hour before running low on steam. Alex was - thankfully - sound asleep, which is normally a good thing, but in this case it meant I couldn't just take him for a walk or to the park.

His nails needed to be cut so I put on an episode of Peppa Pig to keep him still so I wouldn't cut him. For anyone unfamiliar with this British porcine, it's fabulous. Each episode is 5 minutes and everyone falls down when they laugh. We all love them. After the show was over we got up and did something else. It didn't take too long though before I started thinking longingly of the stillness and peace I felt while he watched the show.

He's been all about the potty lately, most of the time telling me when something goes into the diaper and wanting to sit on the potty at seemingly random intervals (often right after putting something in the diaper), but of course the potty is still safe to drop food into. I even totally freaked him out one day as he started peeing on the carpet and I scooped him up and got him on the little potty. He stopped and wouldn't go again til I put his diaper back on.

I took his diaper off, put Peppa on, and picked up my book. About 4 Peppas in I did something in the kitchen, which caused Z to squawk and run in after me. Potty still pristine. One more show and he gets up and .... there's pee in the potty! Yipppeeeee!
Posted by Lynne at 2:18 PM No comments:

A long time ago, when we started using time outs as a way to separate Alex from whatever was causing the hysteria, when it was a place to go to calm down, she chose her own place. It's the corner under the Vonage telephone in the kitchen. If we open both doors to the hallway, it's a very "secret", cave-like hiding place.

Now of course time outs are used when she's aggressive, grossly disobedient, etc. Usually she's crying when she goes to her time out place. So, from a 20 month old perspective, that corner is where we go when we're crying. So now ... Zoltan puts himself in time out when he's upset/frustrated. Will it screw him up forever if he hears us giggling when we see him march off after having a knife taken from him, or when he's redirected into the kitchen from the living room when he's got food in his hand, or any number of things that just frazzle his little toddler mind?
Posted by Lynne at 12:20 PM No comments:

Zoltan loves looking at pictures and naming all the family members. "Mommy! Daddy! Allie!" For some reason he would never include his name, which we usually use in its full form. This week I started using his nickname, which rhymes with everyone else "Mommy, daddy, Allie, Zoli" He repeats after me "Mommy! Daddy! Allie! Oolie!" I think kids named Oolie get beat up at school, let's hope he stays a big kid for a while.

Yesterday I was looking at a book with him and going over the colors. The conversation went like this...
Me: Yellow
Z: Yellow
Me: Purple
Z: Purple
Me: Blue
Z: YES
Me: Blue
Z: YES
Posted by Lynne at 11:55 PM No comments:

Tonight certainly didn't start off on the right foot. I came home to the news that Alex wasn't sleeping and hadn't wanted to sit on the potty. I granted her clemency and let her out of her room - still with dry panties on - gave the kids a snack and tried to eat a little something myself while constant interruptions from Zoltan who "wants shoes" and refused to believe every time he threw his shoes at me it actually brought the moment we finally left the house a bit farther away.

About 1/2 hour after I walked into the house, though, we were setting off again - to the park. The kids got about 20 minutes on the playground (the giggle highlight for me was the bunny rabbit sitting patiently in the stroller waiting while his girl played in the sandbox) and then we went for shashlik for dinner. Is there anything better in the summer than shashlik and beer outside? AND ... they now have English on their menus! Score!

On the way out we had about 5 minutes to let them play and I had brought bubbles so we found a shady grassy area and I blew bubbles for them to chase. Their smiles, laughter, shining eyes, running into each other and falling down and giggling throughout ... that was the best part. I should start carrying the camera everywhere.
Posted by Lynne at 12:58 PM No comments: 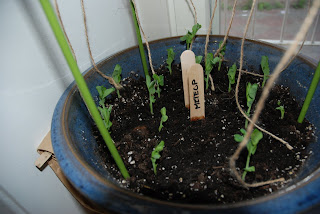 We had the seeds in the house and the large pot just sitting there taking up space in the storage closet. So, Terry decided to give it another go, growing peas in Petersburg. Because although the short-growing, cool-ish weather veggie is perfect for this locale, it does not exist locally. These sprouts are only a couple of weeks old, so there is some definite hope. Keep your fingers crossed for us! 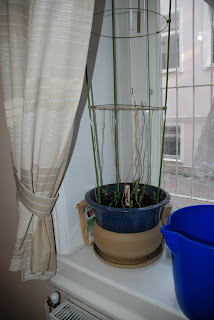 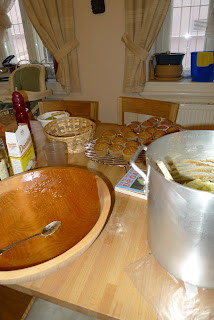