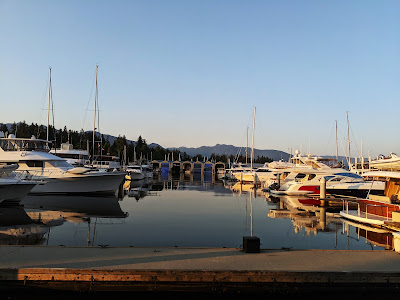 On Wednesday the day started the same. Because I knew in advance the kids weren't doing much in the afternoon, I didn't mind when a call went over my stated end-of-workday.  And the call of course led to more work.  Another call was scheduled for a time that happened to coincide with pool time, so I took the call outside.  All in all it was an almost-full-day at work.

After work we met Terry at a highly-touted Vancouver adventure: Fly Over Canada.  The advertising for it is very alarmist about motion sickness. Given that I only learned a couple of years ago that the sick feeling I get on roller coasters is actually motion sickness, it made me nervous. Oh goodness, it's a lot of over-hype!  The experience is a lot of fun - you swoop along beautiful vistas all over the Canadian landscape as though you are riding a drone.  You're strapped into seats like a gentle roller coaster, because it does move a bit with the direction of swooping. There's water sprays when you pass snow and a few scent sprays.  All in all, totally worthwhile and a fun way to spend half an hour.

We finished the night at a Vietnamese restaurant.  We recommended to the kids the lemongrass chicken/pork/beef with rice.  Zoltan opted for a dish that turned out to be beef in a broth with carrots and radish. Needless to say, he did not enjoy the dish and it was delicious and Terry and I ended up eating most of it.  There's a TV show we're watching as a family and in a relatively recent episode a kid in the TV family goes against parental wisdom and orders a meal that is ridiculous for the venue, is expectedly not-delicious, and earns him derision from the family.  So now Zoltan has been warned to "Not be a Barry" in future ordering decisions.

We couldn't get a reservation for dinner at the highly recommended sushi restaurant we wanted to try so we settled on lunch.  That was Thursday.  We discovered when we arrived that, as I had been playing around with different days and times, and with tables for two or four, that I had made a reservation for two.  They had no tables for four available.  Um .......  Well, the kids had maps in their phones, didn't want fish anyway, and still had a fridge of meats and cheeses at the hotel.  We sent them back and stayed ourselves to enjoy the meal.  And everyone was happy.  On my way back to the hotel I checked out a pastry place and brought back treats for everyone - so even more happiness.

In the evening we headed toward Lonsdale Quay in North Vancouver.  This time we took the SeaBus (not at all the same thing as the AquaBus) and were able to catch some lovely views of Vancouver from the viewing platform.  Terry and I ate fish and chips that rivaled the ridiculously delicious chips place in Haydon Bridge while the kids ate burgers from the vendor next door.  We took a walk to spur our appetites, then got Earnest Ice Cream.  It had been recommended and I had no idea they had such a variety of vegan flavors. Even better, the vegan flavors were DELICIOUS (this is absolutely not always the case).  We ate the ice cream on a bench outside, where we could see a produce vendor that looked like it was starting to pack up. As we were out of fruit, we ran over and thusly brought home a second stash of goods.  Sadly they were not quite as good as the first - Four Season Farms at Granville Market for the win.