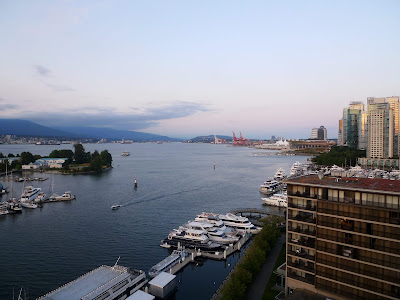 [Disclaimer: Anything you think of to do in Vancouver, we probably didn't do it.  Terry was working, I was working, we didn't have a car, and many things were still closed. All reasons for a return trip!]

The border between B.C and Alberta opened just days before Terry's TDY (temporary work trip) to Vancouver. Having never been before, the kids and I tagged along.

We flew out on July 5, which was not a holiday in Canada so we were able to do some sightseeing. Being who we are, after dropping off our bags at the hotel we hopped an AquaBus to Granville Island where we ate our own weight and brought some home. In Alberta we're always pining over British Columbia fruit, so a visit to the produce vendor was in order. We followed the crowds walking around with bright yellow Lee's Donuts boxes and decided to splurge on a dozen.Oh. My. I had no idea donuts could be like that. We sincerely regretted buying so few and discussed going back.  We also got recommendations of other vendors to visit and decided that in addition to berries, we would stuff our mini-hotel-fridge with sliced meats and cheeses. They also make lovely lunches for the three of us spending our mornings in the hotel room* - Lynne working, kids frying their brains on TV shows and video games.

* Note: Because of Marriott status, our regular room was upgraded in a larger room with an actual desk - critical feature for the one working half days from the hotel room.

The heat was nearly unbearable even with the help of gelato (around 75F ... we are so ruined for living anywhere else in the world), so after our shopping we were wilting and ready to hang at the hotel for a bit.  With the relaxation of COVID restrictions, the need to book certain times for the outdoor pool ended the day we checked in so kids and I headed off to the pool to cool off.

After a bit of Googling, we settled for dinner on a yakitori place not too far from the hotel.  It's been more than 20 years since Terry lived in Japan, so with our assuredly altered palates we deemed it not only delicious (it was) but authentic (it definitely seemed so).

The next morning breakfast at the hotel consisted of eggs Benedict, bacon for Terry and smoked salmon for me.  And the eggs had the darkest most orange yolks I have ever seen, and we've been buying our eggs straight from a farm.  Thus fortified, Terry headed out to the Consulate and I to my desk.

Not gonna lie, working off a small laptop with sticky keys and no mouse is not as productive as working off my home setup.

I had grand plans for the afternoons but the kids defeated me.  I did make them accompany me across Stanley Island to Second Beach - one of Vancouver's many inner city beaches and recommended as one of the nicer.  They boycotted the water, opting instead to read under a tree just beyond the sandy area. I gave up and we headed back, although we did take the long way and linger a while by Lost Lagoon ("look, we found it!"). All future afternoons were spent by the kids inside reading or outside by the pool.

We finished the day with a delicious dinner at Joe Fortes and began my streak of eating fish daily while in Vancouver. Mmmmmmmm.