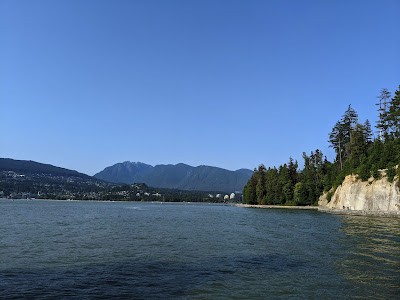 Our last day in Vancouver, the kids had their afternoon hour-playing-in-the-pool-because-they-can't-hide-in-the-room-all-day-like-mushrooms and even tried to skim a bit off that.  When Terry came back 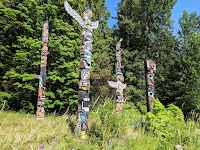 from work, he and I had our plans set.  We borrowed a pair of bikes from the hotel and set off to circumnavigate Stanley Park. The hotel was right around the corner and the Park is a Vancouver highlight.  The hotel estimates that it takes about an hour to bike around (including the stops) and they were spot on.  First stop: the series of totem poles - I had no idea they are unique to the coastal Pacific Northwest, ranging from Washington up through British Columbia and a bit into Alaska. We watched a seaplane gain altitude.  We caught the statues of the "girl in  wetsuit" and Harry Jerome (Canada's fastest sprinter) and the replica ship's figurehead of a dragon.  The sun glinted off the sea, the mountains were hazy in the distance.  We appreciated the tenacity of a tree growing ontop a large boulder.  We passed Third Beach, then Second Beach (where I had dragged the kids all of three days previously).  We traveled leisurely, stopping often to enjoy the views.

Thus refreshed, we dined our last night on Terry's "must do" food event, hand pulled noodles.  (Mine had been the sushi)  The server was definitely skeptical of our choices and tried to steer us towards the house specialties.  We ignored her.  Zoltan took our advice and was not the Barry.  We ordered too much and ate too much and thoroughly appreciated the meal.  We stopped by a 24 hour bakery to choose baked goods for the morning's breakfast, as we weren't sure about the time we needed to get ready, finish packing etc and get to the airport.

We should not have worried. In typical fashion, we were ready to go early.  With a sad "adieu" we promised to return, having only barely scratched the surface of Vancouver's excellence. 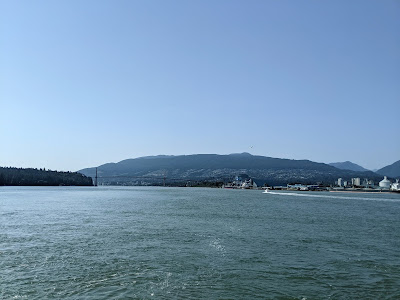