We saw a moose! 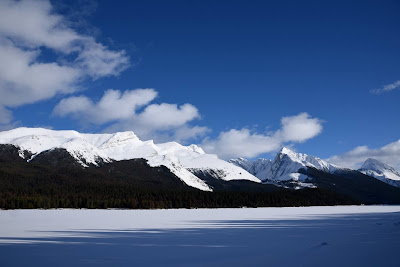 We dedicated Saturday of our Jasper long weekend to Moraine. Moraine Canyon is about 15 minutes outside Jasper, with Moraine Lake another 30 minutes past that. 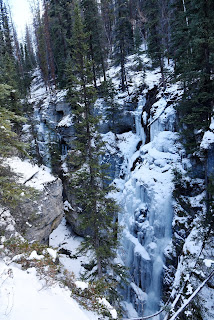 We knew an ice hike to frozen falls would not be possible because of the lack of frozen-ness but had heard the loop around the canyon is still a nice hike. I am SO glad we decided to go anyway. There were actually several spots where we could climb down to the bottom of the canyon, some of which was dry and some had water in both free-flowing and frozen varieties. Not very concerned about bears this time of year, we downloaded trail maps to the kids' phones and let them loose. They were still very eager to collect steps and thus treats, so they left us in the dust, although they did sometimes double back to check on us and gain more steps. One of the most fun stops was in a cave that had what looked like ice stalagmites rising from the ground. The kids got behind it, and the glow from one of the phone flashlights through the ice looked ghostly. It was lovely. We also got to see waterfalls both frozen and running, and falls both far away and ones we walked right up to.

After the hike and some lunch, we headed toward Moraine Lake. The hike we ended up choosing was called the Moose Lake Loop, and it leads from Moraine lake to Moose Lake. The signs that have been features in social media advising folks not to let moose lick their cars - we passed that sign and it gave us hope for a possible moose sighting.

It was supposed to be a decent snowshoe, but we are learning that either this just isn't the year for snowshoes or trails generally get too packed down. Within the first 500 meters or so Zoltan had a total meltdown and removed his snowshoes. Alex soon followed. Even Terry eventually decided they weren't working for him and took his off. There was a woman and her son that were following the same trail at roughly the same pace - we'd stop for something and they would pass us, then a bit farther up vice versa. They saw two moose on the road on the way in, we must have just missed them. Awww!

Things definitely perked up once the family has shed their snowshoes and we got some beautiful views of mountains across the lake. On the drive back to the hotel we finally crossed the last Alberta wildlife off our bingo sheet - there were moose!  One in the road, and one off on the shoulder. They looked like a mom and baby. We got a couple of photos from my phone - we were not about to stop and have Terry go around back to get the good camera.

For dinner we tried the DownStream. My smoked duck was extraordinary and was even more delicious as a sandwich the next day. All the other meals were decent but nothing to write home about. All in all, it was a very satisfying day.

The trip home the next day was uneventful, with a few photo/leg-stretch breaks but no hikes. I took lots of mediocre photos through the dirty windshield of stunning mountains, then a new set of stunning mountains. There is a reason this is considered one of the most beautiful drives in the world. 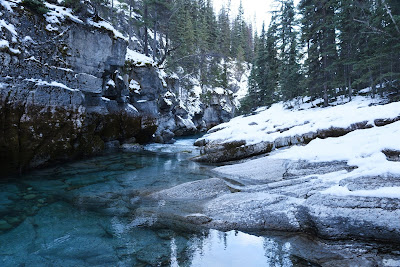