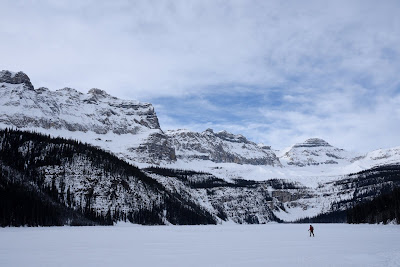 Saturday we were up and out the door to a well-recommended hiking trail - Boom Lake. It was our longest hike as a family - over 10km. Terry feared Zoltan's sluggishness would keep us from ever cresting that hill, but with the incentives we'd put into place the weekend before he was more than happy to keep trekking ahead. There also were no really huge climbs, so that helped too. We didn't want to throw too much into one experience! 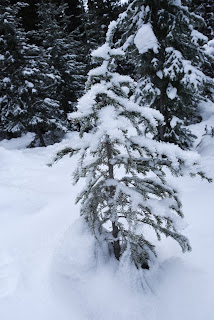 At one point the trail narrows with snow-dusted evergreens on either side, which Alex called the enchanted forest. She's so grouchy and teenagery, and then comes out with things like this! Also, a lot of the snow was more like crystallized flakes. Neither Terry nor I had ever seen anything like it and we've certainly been around plenty of snow.

When we got to the lake, it was time for lunch. A gray jay thought so as well, and we had to defend Alex's sandwich from it several times (the rest of us kept the sandwich in the bag in between bites). We had done a great job keeping Zoltan's blood sugar up and although it was the longest hike, it was also the least fraught. It felt weird telling my kid "you may not feel hungry, you may feel anxious or angry or grumpy. Just eat." when of course mostly we're supposed to be telling our kids to notice actual feelings of hunger before chowing down. But I digress.

After eating we wandered down towards the far end of the lake, where we could see waterfalls high up in the mountains. We knew that parts of the lake were avalanche territory so we didn't stray too far. The return was pretty uneventful except the trail was definitely getting busier and the parking lot was packed when we left (plenty of spots when we arrived). The one regret of not doing the hike later was that the sun started to peek out and the skies got a bit bluer, which is always nicer for the photos. But avoiding crowds is a worth goal.

After all that exertion, we had a few quiet hours at the hotel and off to our favorite Banff restaurant, Park Distillery. It was as delicious as always, and one funny note is that the table next to us turned while we were there. The first couple had been speaking French and when the second pair started talking, I understood them so my mind said "French." Until Terry leaned over and said "Hey, they're speaking Russian." Oh yeah, they are. 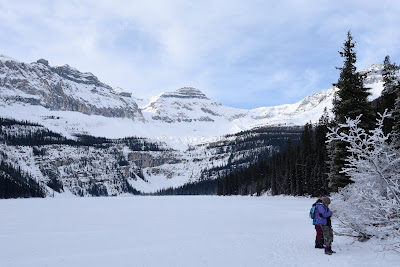