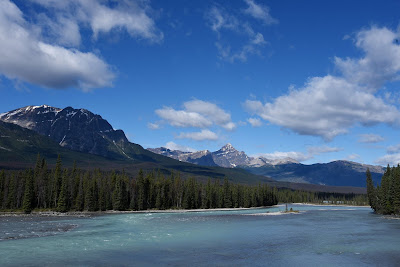 On our last morning I woke earlier than anyone else and couldn't sleep. But it was of course in the 40s and that doesn't work for me. So I did something for the very first time - built the campfire! I don't care that the kids learned how to build a fire during their survival camp and the oldest is 12. I had never built the fire myself before and I am super proud of how it turned out. Another fancy thing we tried this time was making pancakes. We had the wets mixed in a jar in the cooler, and the dries in a larger jar with the other nonperishables. We figured we could just pour the one into the other, shake it up, and voila! It actually did turn out pretty much like that. Our homemade blueberry syrup on top and hot beverages for everyone ... it was a great start to the day.

For our return trip we planned to take a number of short stops - essentially just stepping away from the car park, snap some photos and get back in the car.

Stop 1: Athabasca Falls. There is a relatively short hike into a canyon and by "potholes" created by the rushing water. We did not take the hike. We mostly wandered from viewpoint to viewpoint, and were rewarded with a rainbow produced from the mist of the falls. The falls are reported to freeze in the winter, so I see a second visit in our future!

Stop 2: Sunwapta Falls. I can't remember what made these falls seem particularly spectacular in my research. They were nice but when you're made checking out all the local waterfalls a priority, you start to get a bit jaded. I believe these were the falls where people made their way to the rocky edge just by the waterfalls for their photo ops, and I did mutter to Terry "And this is when we get to see someone go over the falls. I can't watch."

Stop 3: Athabasca Glacier. There was a lot of uncertainty, given the information we could find online, about whether we could actually get anywhere near the glacier without buying the Columbia Icefields package where they bus you over and you walk on the glacier. (when driving away, we saw the private drive for the tour). It was a bit of a hike to get to the point where the path to the glacier is roped off - and between the rope and the glacier was a summertime river so really we were never getting anywhere near the thing. We could still photograph it of course, and make plans to allow time for the tour next trip. The other interesting although disheartening thing is that starting from where you'd turn off the road (2.2 km from the parking lot) and the entire drive-then-walk to the general glacier vicinity, are signs proclaiming where the glacier was in the past. It would have met the turnoff in 1935, and the ropes are where it was in 2014. That's a lot of melt for one (admittedly long) lifetime! 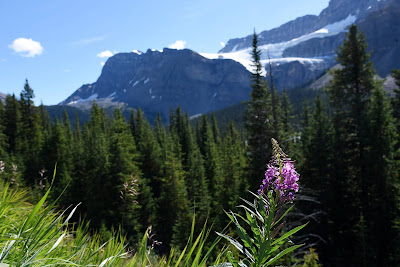