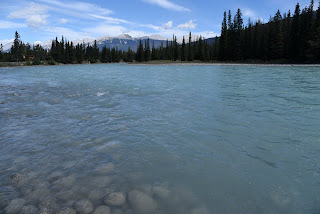 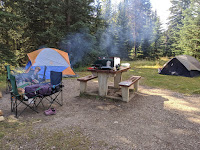 The next morning was not as chilly as I'd expected, or perhaps I am getting used to nearly-freezing sleeping temps.  We had decided on a lazy morning, and Terry put the new dual-burner camp stove to good use with eggs and bacon sandwiches on bagels, as well as coffee, tea and hot cocoa. We prepped sandwiches, apples and granola bars (homemade - Zoltan got the recipe from the kayak guide featured in our last vacation) for the bike ride. Wapiti campground has a bike path leading directly out of the site and up to town or to a series of lakes. As none of us are particularly energetic or skilled bicyclists we really had no particular idea of how far we would get. It also turned out my new bike has a different valve than the other bikes so Terry was not able to add air to my tires. I really felt it on the ride.

The path winds through woods and spends part of its time just off the road. Alex noticed an elk in the woods down a bit of a ravine from the bike path, so we stopped to gawk at that. Right around the time we needed to stop for lunch we stumbled onto a rocky riverfront, so we took a break and broke our bread. Terry and I also had a discussion about whether to head toward the lakes - the original, optimistic plan - or just go to town. Town won out.

This is where I sing the praises of Vicious Cycle in downtown Jasper. They loaned me their bike pump and showed me what I was doing wrong with my valve and pumping.  What a difference a tire full of air makes!

I then met up at Terry and the kids hanging out under a tree by the information center. Very cozy. We hit the candy store and the grocery store before starting the ride back to the campsite. Other than lagging way behind because I don't like to go fast on the downhill, there were no incidents or mishaps (yay!).

Dinner was baked potato, steak, and some raw veggies. My brilliant move of the day: the apples we'd brought for snacks were mealy and not tasty. So we cut them up, I sacrificed some of the sugar I brought for my tea, and we threw them over the fire when we pulled dinner off. Just in time for dessert we had yummy baked apples.