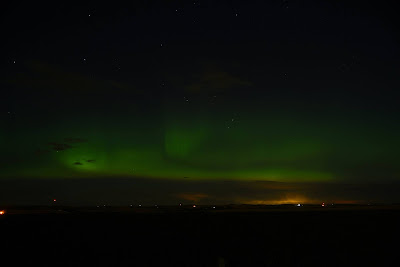 When we lived in St Petersburg, we took an Arctic vacation in Lapland to cross off the one item on Terry's bucket list. We saw an aurora borealis. Turns out, that only whet our appetites for more.

Within the first month of our arrival in Calgary, we were directed to a Facebook page (yes, that is still around) for folks who check out scientific data, make guesses about where good viewing might be, and head out in the middle of the night in hopes of catching a view. People even do this on a work night! We were super stoked, pumped up to be just like these dedicated individuals whose stunning photography we would marvel over the next day.

But there were always hesitations. It is the middle of the night, usually, and we had work the next day. Plenty of times folks would post about going out and never finding her (Aurora). What would we do with the kids? If no sleep on a work night was a dicey proposition, no sleep on a school night is a hard "No." So we spent our first few months just watching and reading. We learned a few things, like Bz going South is good but if it goes North you may as well go back to bed (except that it can suddenly plummet South at any moment, you never know, Aurora is a fickle one). After October there really weren't any more auroras near Calgary, although to the way north it was still a nearly nightly occurrence. We learned about solar flares and solar minimums and lots of reasons why the aurora was probably going into hibernation.

We got sad and worried we had totally missed our opportunity.

Turns out 2019 was a solar minimum, which means we are now on a 5 or 6-ish year cycle toward the solar maximum. So things can only get better!

Back to Friday night. In the evening there was chatter that conditions looked good for an aurora, so after the kids went to bed I was back on Facebook seeing what people had to say. Some were already posting photos of the aurora from locations within 30-45 minutes of our very house! We got excited. I installed Facebook on my phone so I could track where people said they saw stuff while en route. We took the general advice that is given every time a newbie asks "Where to go?" - which is "head north to get out of the city, then go east or west." Folks were posting photos from due west and from due north, so we started off with a goal in the northwesterly direction.

We did pull over on the side of the road once because there was something hazy and we weren't sure it was anything. Nothing green was visible to the naked eye but when we looked at the photos later it was unmistakable.  But that's nothing to stay up all night over, so we kept hunting.  At a crossroad where we were about to turn, we decide to pull over and check out the sky. And there she was.