Although Terry and I met while living in D.C. (actual D.C., not MD/VA) this is the first time we've lived here with children. And it makes a difference. Take, for example, pumpkin patches. Where we each come from, these are normally fields where people can go pick their own pumpkins, in the same tradition as apple picking in the fall at a nearby orchard.

Pumpkin patches in this area are an entirely different experience.

My father was visiting last weekend and we all decided the right event for what turned out to be the most ridiculously hot October day in history was to try the mother of all local pumpkin patches, Cox Family Farms. It took us a good hour to get there, so I was already feeling a bit annoyed and skeptical when we arrived. I was soon transformed.

Because of our afternoon meetup time, we only had three hours there. It was not nearly enough  time.

There were slides and more slides. The kids are some of the tiny blobs on the slides (Zoltan on top, Alex about to get on the slide in the bottom photo) 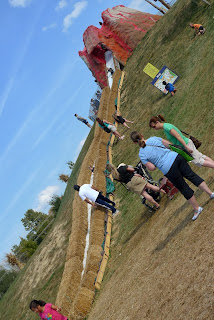 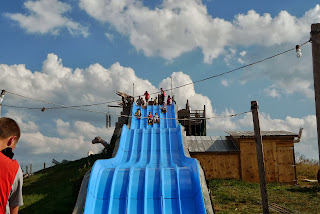 A children's play area where my kids could hang out while the older "kids" tried the more advanced slides. 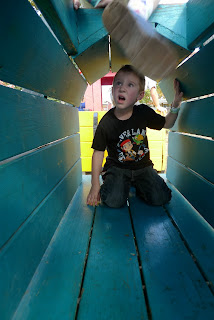 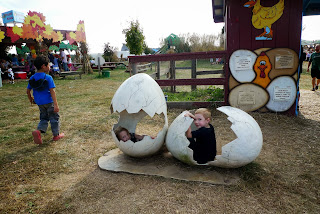 Hay for the children to play in. 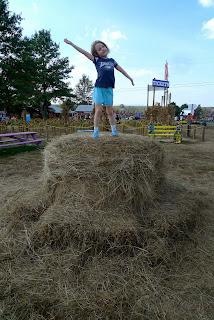 Kids with their grandfather. 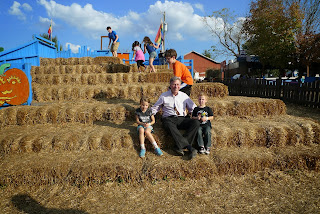 There were also rope swings, and a corn maze that my nephew led Alex and my dad through. I am happy to report they did get out just fine. The hay ride was surprisingly long and eventful - the kids didn't get bored or antsy.  And, my favorite part, there were boxes of apples to eat (Rome and Gala varieties) and Dixie cups in which to drink apple cider that poured freely from fake casks. Early on, my dad purchased an enormous bag of kettle corn from which we all snacked.

All in all, it makes me eager to check out the pumpkin patch in my neck of the woods - held at the orchard where we get our apples anyway.
Posted by Lynne at 9:44 AM

We went last weekend too! That kettle corn was addictive. And I think the apple cider faucets were my son's favorite part of the day... with that giant blue slide being a close contender. Definitely a good time, but man, it's pricey! I heard they have a government workers discount weekend so we might try to go back then. It was great but the oppressive heat kept it from feeling truly like fall, so might be fun to do again...