Whenever we drive up to PA for cabin or family trips, we pass the Catoctin Wildlife Preserve and Zoo on Route 15. It's a bit under an hour away, making it an easy day trip. Turns out it's a bit less than an hour from Terry's sister, too, so we decided to get together on the Sunday between the kids' birthdays and meet there. 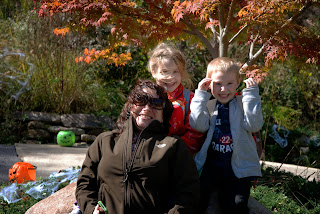 I'd read up on it a bit, so we made sure to get tickets to the safari. It was the highlight everyone said it would be!  The zoo/preserve itself is interesting - the enclosures are crazy small, but the animals seem healthy and well groomed. All the animals we saw had healthy looking fur and behaviors. Honestly, I'm not sure how this is true but it is. 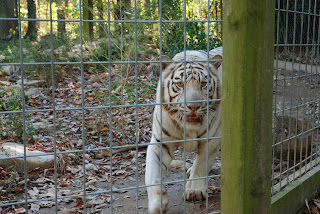 There are several separate areas where you can feed an assortment of friendly animals. We'd gotten a cup of "zoo food" at the store/entrance and the kids were delighted to feed the goats, llamas, potbellied pigs. 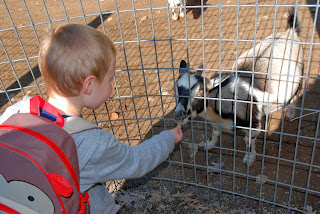 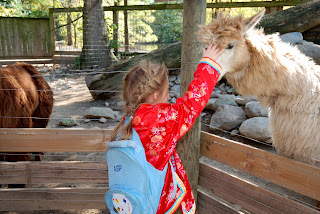 There's also two playgrounds on the zoo grounds. One is brilliantly located by the safari pickup point, as well as a snack bar (not open in the winter) and a bathroom (all bathrooms in the zoo appear to be portapotties, from what I can tell, except for the bathrooms in the same building as the store/entrance).

The safari: There's three "cars" in the jeep + trailer system and of course it's bench seating all along the perimeter. They had boxes of English muffins that we fed to the animals who came by. During the course of the safari we drive through four different enclosures and stop within each one and have time to feed the animals who show up. Poor Alex got pecked by an emu she was feeding so I had to pull out the Neosporin and Band-aids and she calmed down pretty quickly when she couldn't see blood anymore. My highlight was feeding the zebras. 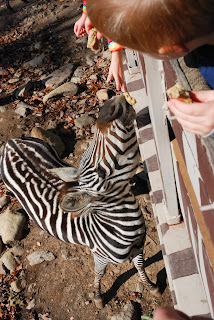 In sum, we spent a bit over 3 hours there and didn't see everything. We had decided to meet for brunch first so it was already getting toward naptime when we entered the zoo. If we'd gone in the morning we easily could  have spent more time. The concessions are closed in the winter, which was a benefit (whining for treats was minimal) but if we hadn't been prepared it could have been problematic (tired kids tend to want more snacks).
Posted by Lynne at 6:19 PM