For all our time in PA, and for all of Terry's Pennsylvania Dutch Heritage (1/16 maybe?) we've done very little "Dutchy" stuff. This year, both in an effort to find entertainments for us and the kids and for me to see what it's all about, we decided to spend our 4th of July at the Kutztown Folk Festival.

I am thrilled to report the weather didn't top 90 until around lunchtime, so we got a lot seen/done in the morning before we started to overheat and suffocate.

First stop: funnel cake. As a Massachusetts native, I will go to my grave preferring fried dough, but funnel cake is part of the kids' heritage that they have not yet experienced so that was treat #1, accomplished within 15 minutes of walking through the gate. 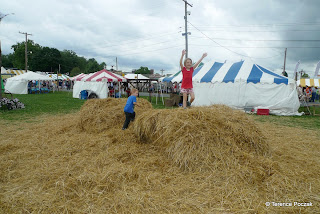 We wandered around the booths selling stuff, and the booths explaining and showing stuff. Did you know there are absolutely no feral honey bees left anywhere in the world except for New Zealand and one other island nation? (I also want to note at this time Blogger's spell check does not seem to know about the really awesome country next to Australia). Here's the kids watching a potter making a bowl. 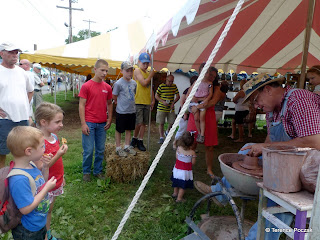 Later the the day the kids got to make beeswax candles ... well Alex made a candle, Zoltan flicked his hot-wax-dripping wick everywhere and got it confiscated so mommy got to make a candle. Oh, joy. 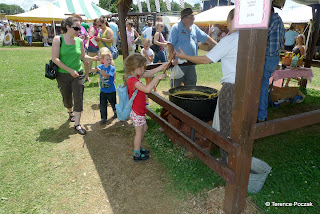 The kids' area was set up with several types of bouncy castles and a super cool "train" which must be seen rather than described. So here it is, with happy kids bouncing around. Terry's trying to convince his dad to make something like it for rides up at the cabin. Not likely to happen. 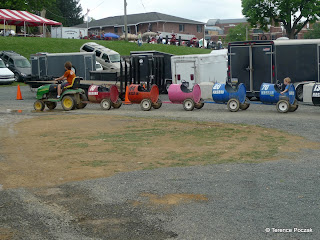 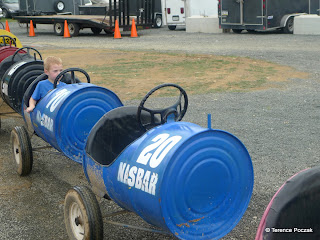 There's also the petting zoo. Zoltan had no interest in petting anything other than the bunny rabbits, while Alex visited everyone. She also had a great time feeding the goats. 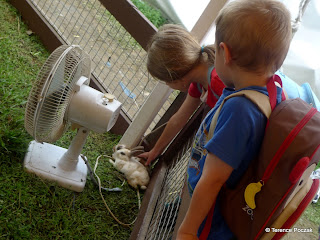 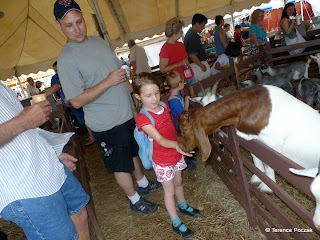 We finished the day checking out the old time tractors. This one is pretty clearly the prototype for the star of a favorite book series, Tractor Mac, so the kids happily posed in front of it. 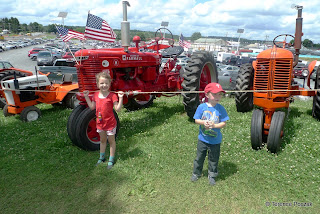