The kids are still a bit young for amusement parks and quite frankly the prices nearly cause heart failure. But, when Terry's sis hands over 4 comped tickets to Hershey Park, only good until July 4, we started plotting a time to go. That was a day last week (Terry forgot to edit the photos off the little camera, so this post has been waiting). Yes, I know the temps were in the 90s.

The night before our trip we were out a bit late, so we got a later start than planned. We pulled into the parking lot around 11:30am and had a brief conversation on the strategy of the day. I made a comment about leaving around 7-8pm and Terry said "We won't still be here at 8pm".

We had planned to head straight for the water rides, but they are at the complete far end of the park so we decided to stop for a few rides for the kids along the way. First, though, we got them officially sized. Alex is the little Reeses Cup and Zoltan barely didn't make it, so until probably some time next week he's still a little Kiss. 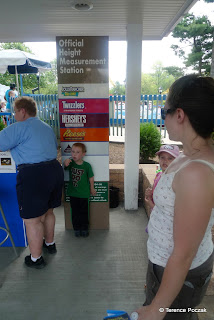 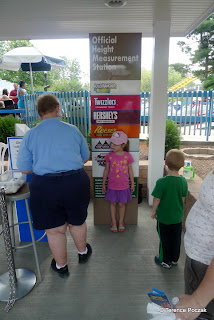 In the end, by the time we got to the water rides they had all just closed about 45 seconds previously because of predicted thunderstorms. It was also around 3pm. I was fuming, both figuratively and literally. The "aggressive thrill" version of the log flume was inexplicably still running, and there is a "splash zone". We ran over there, grabbed spots by the gate, and got soaked. That was all it took for sweetness and light to return to my demeanor. We went back to check out other rides while waiting for the storm to come.

Alex is the thrill seeker we thought she would be, but doesn't like spinny rides. Zoltan went on this miniature train ride about 10 times, and also demanded to stay and watch it carry other passengers another 3-4 times. We were often split into 2 teams, with Terry taking Alex on rides that were too scary for Zoltan and he and I found other entertainments. 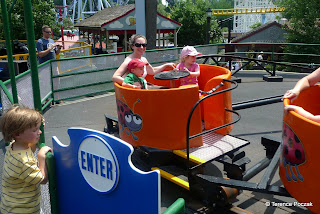 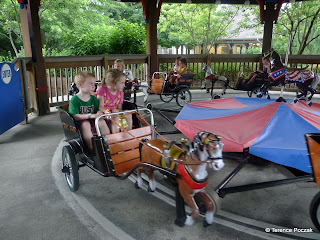 The storm came and the rain probably would have felt good but the kids were on a ride under a roof and we were watching them, also under a roof. The water park did indeed eventually open, and we hung out in the tidal pool until we needed to get moving if we were ever going to get home.

Alex's highlight was the most roller-coaster-y ride we found to put her on. Zoltan's fave was the monorail. My favorite: there was no fighting and very little whining even though the kids were already overtired, missed their naps, waited in lines and walked through the entire park a couple of times in 90 degree heat.


The car is a "Hot Wheels" Corvette 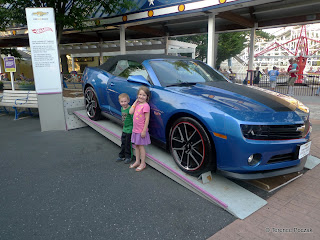 Around 7:20pm we decided what the heck, let's do the Chocolate Experience and learned how chocolate is made. The mini Hershey bar at the end had nothing to do with this decision :-)  We then discussed whether either child had ever eaten a Hershey Kiss and we decided to get them a larger-than-life Kiss each as their departing treat. I am thrilled to report they now do several sizes of Kisses and not just the one the size of a  baby's head my dad's students used to routinely present him with.