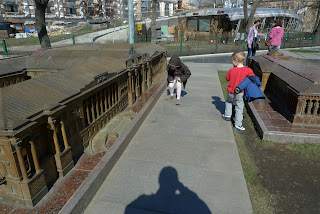 The first 3 days of our 5 day weekend were largely consumed with chores. There were too many things that absolutely had to be done before I left next week. We got outside every day, but the outings were largely brief and close (major exception being shashlik ... it was important to me to do that one last time, and there's still a chance we might go one last, last time). 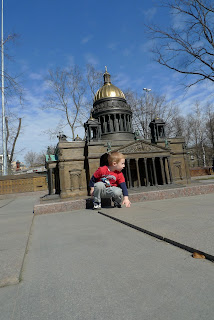 Today the sun was shining, and I just had to get out. I suggested we metro to Gorkovskaya and see if we could find the miniature replicas of the major buildings in Piter that's supposed to be behind the metro. If not, there's always Peter and Paul Fortress, the Artilliary Museum or the zoo. The kids love riding the metro, it could be an outing all on its own. So we threw some things into a bag and off we went. It is remarkably freeing to go out with the family with no stroller and everything we need fits into a large purse. As that was packed, however, I took my leather backpack. 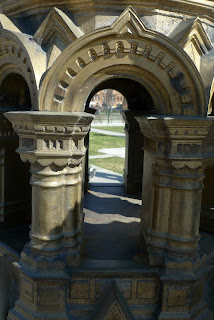 I hadn't realized it was actually a miniature of the city. Shiny, polished marble represents the rivers and canals. Grassy areas are parks and a couple of the major ones, like the Summer Garden, had its polished marble "pond" laid out.  The buildings are where they are supposed to be. We read an article a couple of months ago about how this was a gift to the city but the city never did anything about it and vandalism was destroying the place. Today everything was cleaned up, if Spilled Blood lacked color, and a gentleman with a megaphone kept anyone from touching the displays. Or rather, he yelled at everyone as they touched the displays. 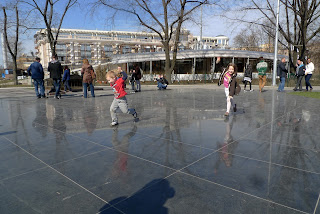 It was warm enough to be without jackets in the sun. The kids had the best time running around town. Zoltan even got on his belly to "swim" in the Neva. We got lunch in a nearby cafe and home in time for nap only a little late.
Posted by Lynne at 11:17 AM