It has now been almost a week that it has been just Zoltan and me staying back while Lynne and Alex went back to the States. So far things have gone surprisingly well. Zoltan has been amazingly well behaved during this time. He regularly asks 10 times a day when we are going on an airplane to see Mommy and Allie, but no major tantrums or fits.

Thursday and Friday were Russian Holidays so this has been a long weekend of just me and Zoltan. We spent much of the time going through our stuff and starting to organize everything for the packout that is coming soon enough. In addition we have had a chance to do some fun things. Here is the quick rundown of our long break.

Thursday: This was parade day (Victory Day in Russia) and half the streets are closed to traffic surrounding us so getting anywhere by car was difficult. We are close enough to the parade route that moving the car meant we are likely to lose our parking spot as well. So today was a spend the day locally day. Off to the playground we went. Unfortunately most of the parade was happening during Zoltan’s nap so we did not go to see it. After nap the weather was gorgeous so we went back outside to the playground.

Friday: Rain, Rain, Rain. Lots and lots of rain. I had planned on going by Metro to the Russian Museum with Zoltan but I didn’t feel like walking in the rain. So instead Zoltan and I decide we would go the grocery store. He does love going to the grocery store for whatever reason. At the store I bought him a Chugginton DVD so we could see what it was like. Turns out the whole thing is in Russian with no other languages. Many DVD sold here have both Russian and English and many have other additional languages. I let him watch one when we got home so I could do some organizing. From that point on all weekend all he has been asking for is the “Train Movie”. Not sure why these are movies and not shows since they are about 10 minutes long. After nap the weather cleared and back to the playground.

Saturday: Raining again. Today I had the idea to go to the Grand Maket since that was indoor activity and Zoltan loved it so much the last time. Once Zoltan heard the idea he went and got himself dressed to go. This was despite the knowledge that we were not ready to go. Boy O Boy was he ready. Like last time the Grand Maket was hit. Here is a photo of Zoltan enjoying himself. Also we found little items that I totally missed last time.

Sunday: Weather was decent. Zoltan agreed today since the weather was good we would take the Metro to the Russian Museum. He loves looking at the trains and riding trains so the Metro was a hit. Above ground we took some photos on our walk. When we got to the Russian Museum Zoltan was hungry so we sat on the benches outside and gave him a snack. After a snack and enjoying the weather Zoltan decide quite strongly that he did not want to go to the Museum. Since I just want to get him out I didn’t fight it. We walked to the canal and watch some boat come and go on the canal. Next he wanted to take the bus back to the house. So we jumped on a bus and got off near our house and went to lunch. On the walk home we stopped by the playground to let him play before heading home for nap. Busy Busy day. 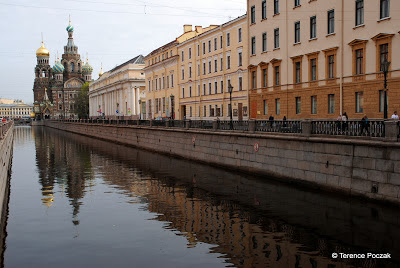