Not too far from Sadovaya, in the middle of a block and otherwise unremarkable except for the butterflies painted all around and above the door, is a tropical butterfly paradise. Kept at 28 degrees Celsius (steamy warm for you Fahrenheit folk), the butterflies are thrilled and the patrons are warned not to use their cameras for 10 minutes to let the fog steam off.

The downside to the trip is that I only remembered that Zoltan is afraid of butterflies that morning, after we already promised Alex we'd go and quite frankly, both Terry and I wanted to see it. In the end, Zoltan spent about 3 minutes in the butterfly area, then spent the rest of the hour or so there eating his snack and playing with his cars in the outer area, accompanied by me and Terry in turn. The extra down side is because it was only Terry and Alex, nobody got the photo of his handing the butterfly off to her (which I could at least see) or when a butterfly walked from his leg up to his chest (which only Alex witnessed). 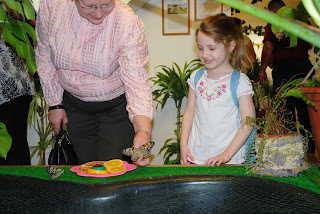 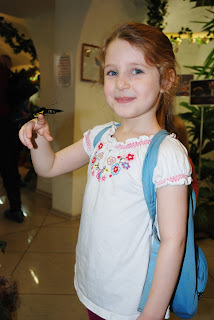 Alex looks so proud to be holding the butterfly