Both kids have been talking about skating lately. This is due partly to the partial thaw then re-freeze of the city a few weeks ago, which rendered all sidewalks mini-rinks. But, as Terry is hell-bent on getting Zoltan into hockey, the day will have to come sooner or later that he dons skates and hits the ice (hoping, of course, not to really "hit" the ice too hard or too often). 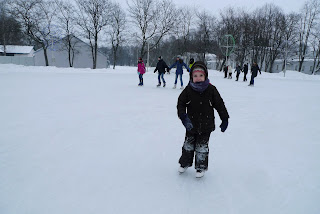 Elagin island - already our family favorite place - has a free, open, outdoor ice rink. I think in the summer they just call it "ground" or maybe "pond". Terry and Alex already have skates, so for the price of 400 rubles to rent skates for Z and me for an hour, the family had a great morning! Both kids said they wanted to go again, although Zoltan said another day - not again today. 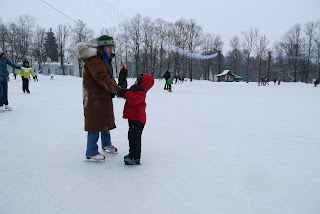 Lunch ended up taking forever so we didn't get home until deep into normal nap time, and both kids had fabulous naps. There's nothing like fresh air and exercise :-)
Posted by Lynne at 12:12 PM