This flight gave me hope for the future. The 3 hours to Germany was nothing, between snack and some of their toys and coloring the kids flew through that one. Frankfurt airport is so much better now that the construction is over (yes, that's how long it's been) but still not recommended. The good/bad thing is they have a pretty decent play area (good) but it's out past security (bad) and in a different terminal so we had to ride the tram (good - Z loved it; bad - adds time). We were at least able to give the kids 45 minutes of running around burning energy and we got something that approximated a meal.

The long haul flight started off awfully enough. Waiting, waiting, someone checked luggage and never got on the plane so that bag had to come off, then there was a medical emergency so first the medics came, then it was decided that person and travel companion had to get off and their luggage found. However, when we knew we were delayed one more time and I got up to get Z to the potty, we met the flight attendants. Awesome group of people. I love all of them. When explaining to one pair of attendants about Alex's need for darkness and the challenge of an all day flight, one lady handed me eye shades (the kind given away in first class) and wished me good luck. Wonder of wonders, it worked! Zoltan fell asleep pretty early on sucking on the lollypop we give the kids for their ears during takeoff and landing. T was able to ease the pop out but that may have been the downfall, as Z was awake only 20 minutes later. Alex, who we never thought would get any shuteye, slept for more than 2 hours! It was heaven. 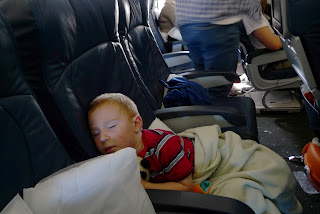 Then it was time for snacks and TV. We'd been building Zoltan's tolerance for sitting and watching TV during the course of the summer and it was well worth it. Between the variety of movies offered on the plane and the fact we had 2 tablets loaded with their favorite shows, the kids were pretty happy for most of the flight. They did a little coloring and we read a few books, we pulled out the Leapster gameboy thingie and they each got a turn with it ... but most of our 8 hours in the air was consumed with TV, and I'm cool with that.

The next bit of heaven - our agreement was I would stay here an extra week after Terry went back, but on condition we flew in and out of Philly as my sanity and the kids' ability to not completely melt down only last for 2 planes, not 3. So we were met immediately outside customs by a nice man who had a luggage cart, loaded our stuff in it and whisked it away to the vehicle and met us around the other side, with a cooler of water and rented car seats so we didn't have to lug ours on the plane. The same nice man will bring me and the kids to the airport in a few weeks.

Zoltan did manage to fall asleep in the car. The one time I actually wished for a teensy bit of traffic, to keep the nap going, but of course we sailed through. So here are the stats: we woke the kids at 4am for the flight, between then and when the kids went to sleep again (at 3am Piter time) Alex slept 2h and Zoltan slept about 1.5h. The good news is they seem to be making up for it, taking their naps and going to bed on time. Terry and I don't even mind them waking around 6am as we're up then too!
Posted by Lynne at 4:47 PM