One of the fun parts of Foreign Service life is all the different places we can meet up with friends. We visited our sponsors from St Petersburg in Lithuania, where they are now posted, and this week we took advantage of being in the USA at the same time to take a day trip to their cabin on the Chesapeake Bay.

The day started inauspiciously enough. I had printed directions from Google Maps and I had my Garmin up and running. Unfortunately, when they disagreed on what to do I had to decide "who" to follow. I got a nice reminder of how I hate DC driving when I got off at the wrong point near the Capitol so had to sit in traffic to turn around then lost in Southeast AGAIN ... totally bringing back the days when I lived here. There really should be a better way for 2 stinking highways to meet up! So I decided to go with Garmin as at least I can follow that without really taking my eyes off the road. Of course, it put me on Pennsylvania Avenue and never told me it was also MD-4 so I spent some quality time panicking about when I would meet up with MD-4, which I knew I needed. The kids, amazingly enough, spent almost 2h in the car without asking for shows!

We finally made it to the Calvert Marine Museum just as our friends were pulling up, then proceed to spend some fun time watching the stingrays swim around, walking around an old lighthouse, looking at the fish and other sea life, and checking out port life way back when. 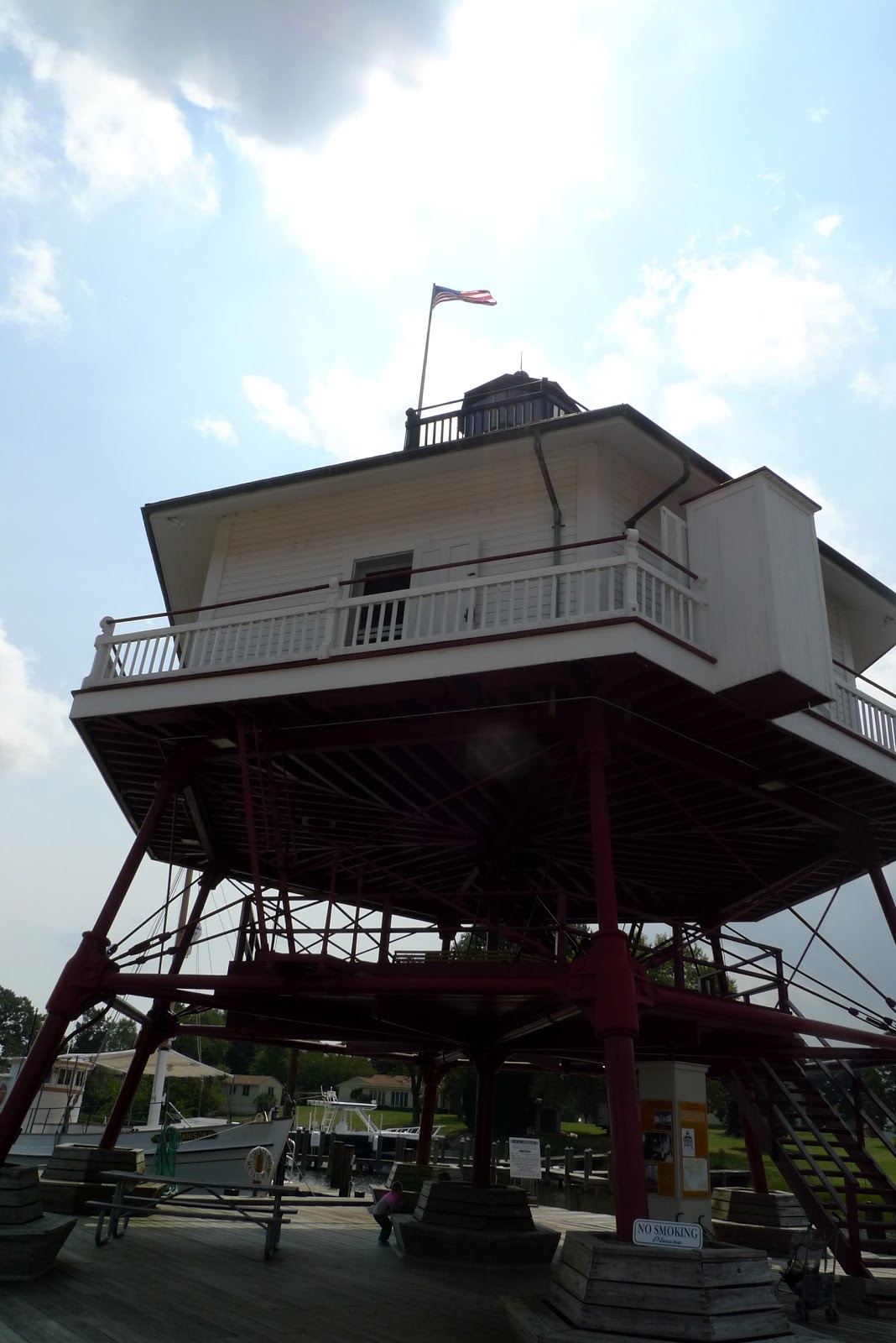 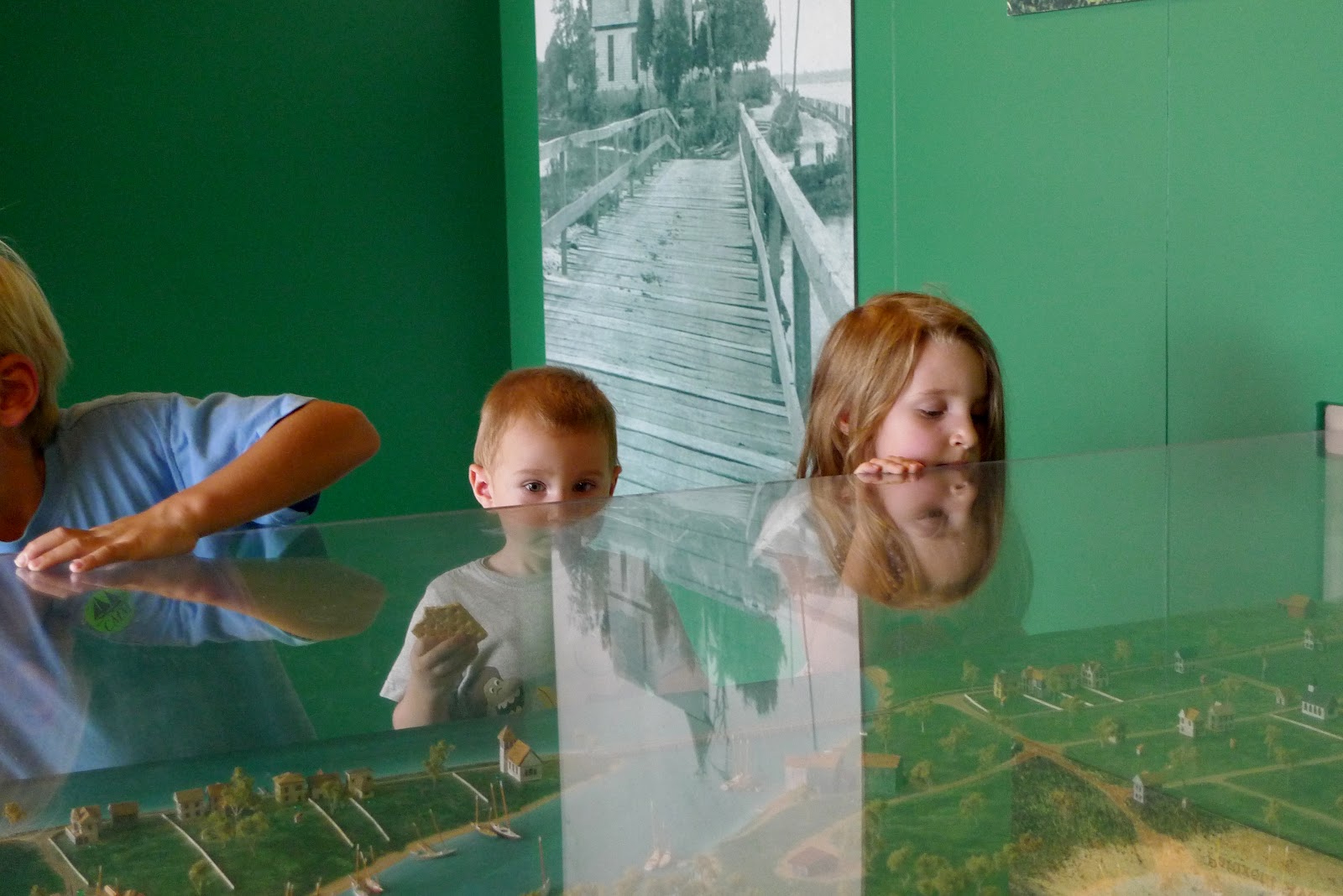 After the obligatory stop at the giftshop (you can tell how hungry Zoltan was, the treat he wanted was a bag of crab shaped pasta, seen here clutched close to his heart) we went for lunch. The kids had hushpuppies for the first time, going down easily with a side of honey. They kept calling them chicken nuggets, until the actual chicken nuggets came. Darn, they had Old Bay in them and the kids refused to eat. They also tried lemonade for the first time, Alex isn't a fan. 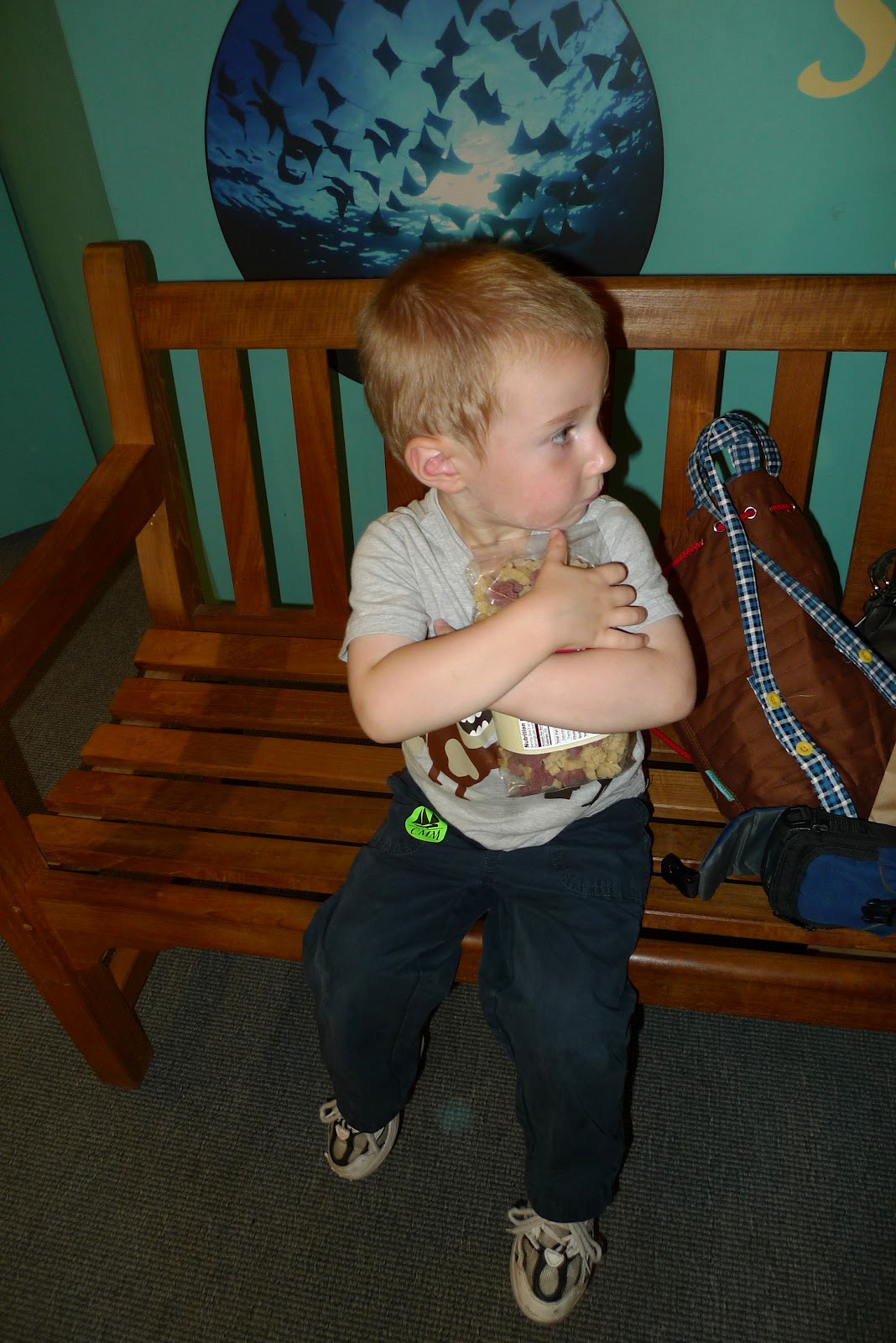 The highlight was going to the beach steps outside our friends' cabin. We probably should have gotten the kids into bathing suits but, well, I did bring extra clothes for them. While our friends looked for sharks' teeth on the beach my kids dug in the sand, sat in the water and got pushed over by the waves.


dry at the beginning 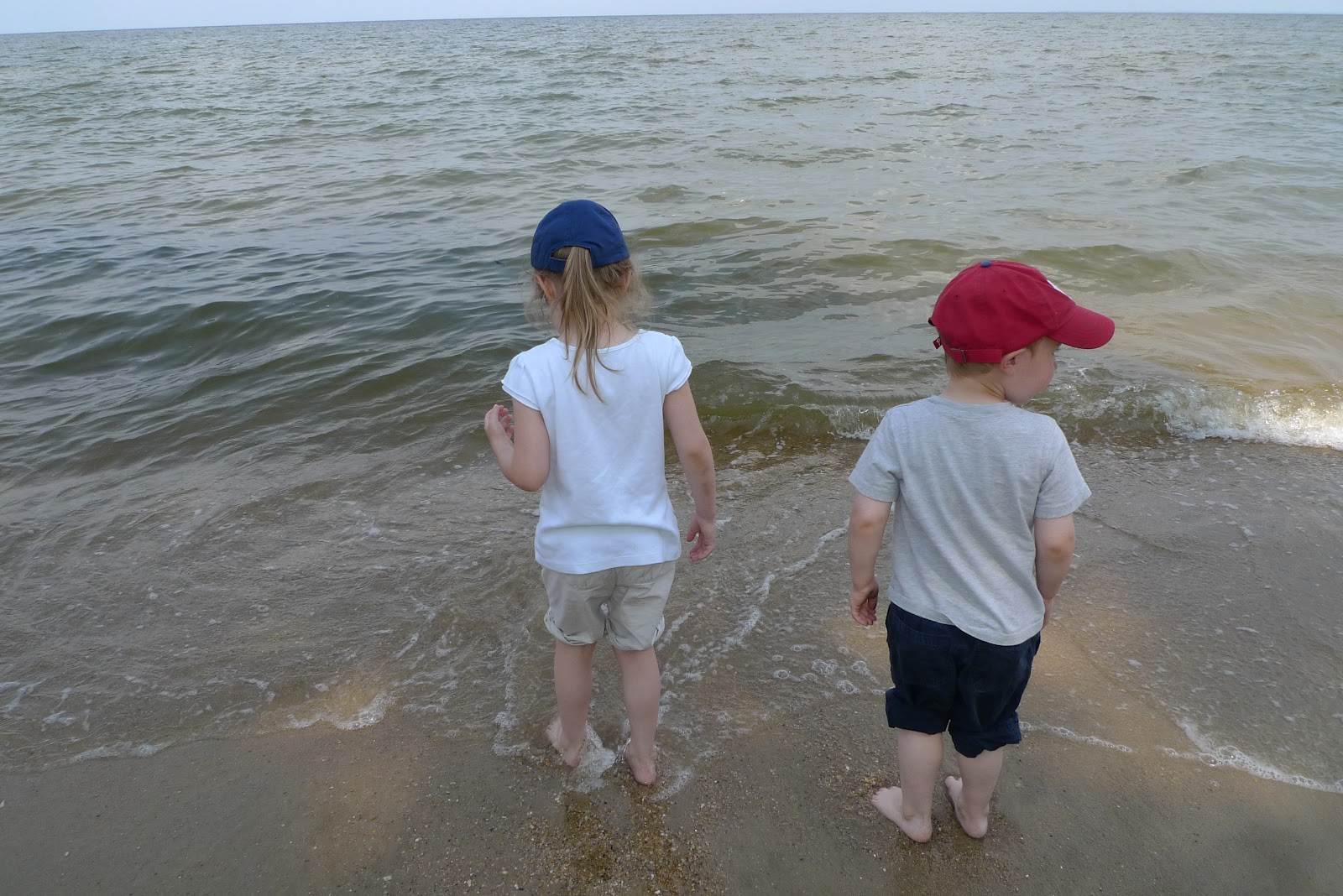 soaking at the end 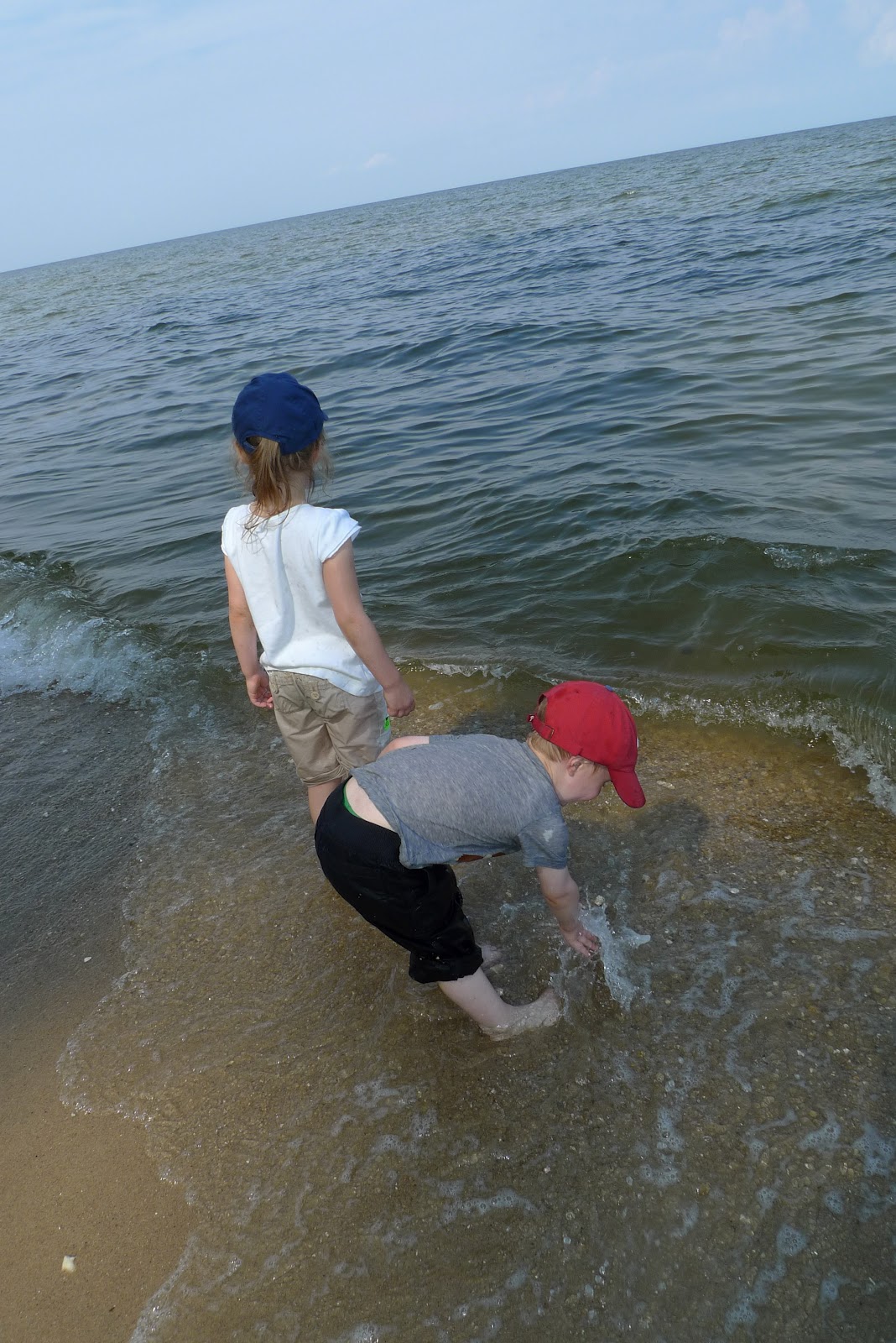 Finish it up with a cookout for dinner, getting some directions advice from our friends, and for the ride home I put the shows on before starting out and we were home less than 1.5 hours later. I threw the kids into their pj's still salty, sandy and sweaty, and into bed only an hour after bedtime.

To paraphrase the old Jewish saying, "Next year at our cabin."
Posted by Lynne at 9:47 PM