In typical Soviet fashion, we received a message this afternoon from the kids' summer camp that tomorrow is the talent show/party and everyone should bring some food or drink to share.

We packed out earlier this week, so we have very close to nothing at all in the house both food- and implement-wise.

We do still have chocolate chips.

Each of the two tin foil pieces used to line the baking sheet used to house a loaf of bread in the freezer. They are both now completely destroyed and fit only for the bin.  There is no brown sugar in the mix. All the white flour is now gone, so the pancakes I planned to make to use up the maple syrup will have to be made with 100% whole wheat flour.

11 boxes of air freight (65lb underweight) and 219 boxes of ship freight (almost 2000lb underweight) later, with a total of 6 suitcases and 4 carry-ons for 4 people, we have crossed a threshold.

Ten men came through my home like whirlwinds, like a finely choreographed dance, and packed, weighed, labeled, moved and paperwork'd all to finish at the same time. Did things get packed that shouldn't have? Sure, but in all cases it was our fault - we forgot to set those things aside. Is any of it critical?  Nope.

Our house now echoes with vast emptiness. Last night, our first night in pared-down surroundings, we went out to eat as at that time we hadn't unpacked the welcome kit. It will be interesting to see how the children entertain themselves with only the toys they had selected to bring in their suitcases (plus several bonus games I'd squirreled away)

I wrote a book!

Well, OK, not exactly. What I did do was write a chapter in a book. Still a pretty big deal to me (and, I'm sure, to my mom).

A Cup of Culture and a Pinch of Crisis is a compilation of stories about travel, foreign countries, and food - topics that many foreign service officers (myself firmly in this camp) sometimes get a little obsessive about.  I am so incredibly grateful to Tales From a Small Planet editors who invited me to join this group of much more accomplished writers, and give my my first, and perhaps not only, taste of publishing.

This is the link for the Kindle edition: https://www.amazon.com/Cup-Culture-Pinch-Crisis-Planet-ebook/dp/B01IGLQ8K0/ref=sr_1_1?ie=UTF8&qid=1468601624&sr=8-1&keywords=a+cup+of+culture+and+a+pinch+of+crisis#navbar

We went to the beach today

Anyone who knows Astana geography knows there is no beach for a good 3 hours' drive. And I certainly did not drive 3 hours each way today to get to a beach. I took a gigantic shortcut.

Khan Shatyr looks like a half-falling down tent, created by famed architect Norman Foster.  It is, in fact, a shopping mall.   As a counterpoint to Dubai's indoor skiing, Astana boasts a beach on the top floor.  We had been meaning to check it out for almost the entire 23 months we have lived here and for one reason or another never made it.  Today, we rectified that.

The sand for the beach was imported from the Maldives.  The SkyBeach has two pool areas, one is a gently sloping beach-like wave pool, with two waterslides next to it (the slides drop off into a tiny pool that patrons are expected to quickly depart after splashing in).  The other pool has a lengthy sandy "shore" about 5 inches below water, but that is essentially a shelf and you abruptly enter the pool from there at full depth. This section of beach is also studded with a rainbow of rocks and pebbles.

The kids had the best time ever. We stayed way longer than I thought we would. They were so worn out tonight there was no talk of stretching bedtime just a little bit longer.

Breaking up is Hard to Do

With 5 weeks to go in my tour things are winding down. Many of my kids' friends - whose parents are often our friends - have started leaving for their summer holidays, only to return after we've left.  My kids spent the last couple of weeks bickering with their friends more often and some friendships ended on such terms that there was no goodbye. Cultural differences I used to think enriched out experiences, and even found endearing at times, are grating on my nerves and offending my sensibilities. We're starting a lot of sentences with "When we are in the USA..." and "When we get to Germany..."

We all know the end is nearing, and it is easier to say goodbye if we are also saying "good riddance."

I had a business trip this week that required me to overnight in a hotel. 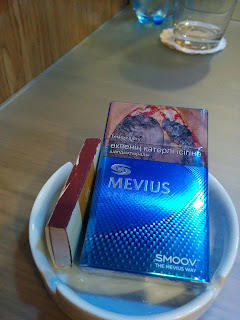 This was sitting on a shelf above the mini-bar, right next to the complimentary bottle of water. 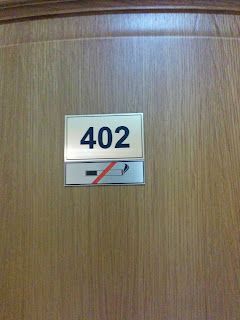 While this was not my room, my room's door was strikingly similar.
Posted by Lynne at 5:55 AM No comments:

Open apology to my mother's mah jjong and canasta groups - Sorry, my mother is going to be insufferable for the next week. I'm sure you have all had your turn as well.

Today was "Speech Day" at Haileybury, where award were given and speeches made. Alex, it turns out, won the academic excellence award for her class - she was the top student (pupil, as the British say). She accepted her award and medal in front of the assembled students (pupils) and parents.  For various logistical reasons, she was actually the very first child to receive her award.

We have friends whose kids attend a school with a more Kazakhstani schedule. That means school's out!  They head home for the summer later this week. When they return to Astana in August we will be gone.  We had them over for brunch this morning. When we said goodbye we knew that we didn't know where or when in the world we'd ever meet again in person (but, thank you internet) but that it wasn't going to be in Astana.

My kids bicker and fight. Yes, most siblings do, but mine always seem to take it up a notch. We've tried numerous solutions, involving both carrots and sticks (metaphorical, folks, metaphorical sticks) and not one thing ever worked.

Then we tried a points system.  They get a point for being kind or helpful to each other, for doing chores, eating unfavored dinners without complaint, and just generally helping us.  The get points taken away for being rude, for fighting, for complaining about chores. If they make it to 2 points by an appointed time each day (somewhere between the end of dinner and the start of getting-ready-for-bed) they get a treat/dessert. The size of the sweet is dependent on the number of points (4 points gets twice the treats of 2).  After 2 points they can trade points for extra allowance instead of dessert if they wish.

Not only has the fighting screeched to a near halt, but they are cooperative and, best of all, simply happier and more loving generally.  As these things become habit we'll raise the bar, but for now we are thrilled to realize we actually need to buy more candy because they are earning treats so many days in a row!
Posted by Lynne at 9:29 AM No comments:

One of the downsides of foreign service life is how often we miss our extended families' big moments. This time managed to be an exception - sort of. My nephew had his bar mitzvah last weekend. We are 20 hours of travel away, we return home within 2 months, and the kids have school.

So, I came alone and represented.

I don't get much jet lag, so the fact that I spent all of 5 days in the USA wasn't too bad. I have a Kindle so the 20-24 hours of travel didn't kill me (I did read 4 books!)  I ate spicy Thai food and Chipotle. I got some quality time with various family members and although we all wished the rest of my nuclear family could have been there, it was just easier. Also, I picked up a bunch of things that will see us through until we return to the USA (a pack of hot dogs, some cheddar, pig and turkey bacons, a box of blueberries, soy cheese shreds).
Posted by Lynne at 6:59 PM No comments: