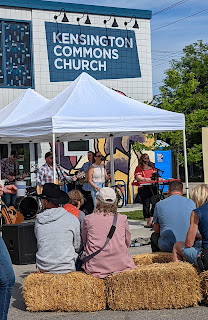 Of course I had heard of Stampede before moving to Calgary. The rodeo thing, right? And when we moved here I heard a bit more about the pancake breakfasts. I heard about corporate sponsored ones, fancy with cocktails and invites being handed to clients and contacts. 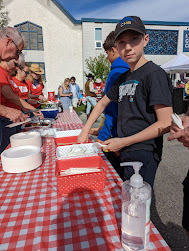 During COVID the whole pancake breakfast thing took a hiatus, so this year was our first opportunities. I was a bit of a disbeliever - organizations just have this breakfast spread and anyone can just show up and eat the pancakes? Yes. Oh, yes.

While I was busy hiking mountains, Terry took the kids to a neighborhood breakfast at a new establishment we had been meaning to check out.  They were on the early side so although the pancakes were cooking, the band was not yet set up and the ponies for kiddie rides were just coming in. Apparently they were wearing cowboy hats. How disappointed am I that Terry took no pictures???

This morning we went to a nearby neighborhood for a church's pancake breakfast so I could see what this was all about.  This time we arrived about 15 minutes after it officially began and the line was down the street, the tables they had set up were full and they were setting up additional ones, the band was in full swing as was the petting zoo. These things are basically like block parties but better in just about every way! What an amazing thing for communities to do in a city.