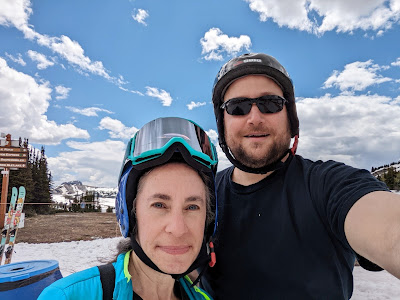 This has been an unusual year. The snow isn't melting as fast as usual, many hiking trails and campgrounds that would normally be open are still closed. Lots more bears around because the continued snow at higher elevations means they need to come farther downhill to find food. And, for the first time since 1991, Sunshine Village was open for skiing.

It was only one lift operating (Strawberry Express), and off that lift only two runs. The line snaked far up the end of the hill although I timed the wait and it was only 15 minutes. We had decided not to schlepp our poles up the hill because we were already carrying a bunch of stuff and it turns out we do use the poles more than just as a mental safety blanket. At one point it started to rain as we got on the chairlift and midway we moved into bluer skies and the rain fell away. The rain. While we were skiing. On July 1.

We arrived later in the day because (1) I had meetings I couldn't miss in the morning because this wasn't a US holiday so we didn't get out the door until after 10:30am and (2) there was a car crash that mandated a rerouting so it took an extra half hour to get there. All this to say that by the time we had done two runs we were very hungry for lunch and were comfortable calling it a (ski) day. 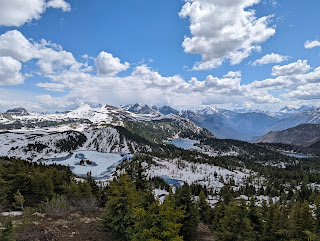 After the nourishment it was time to change out of our ski boots and into the hiking boots. Because the lift next to Strawberry (Standish) was open for sightseeing; i.e. the hiking trails weren't open but there was a half mile walk to a viewing platform with truly stunning views.  I gotta say - it was cold. Like, I was not wearing nearly enough and I kept rubbing my ears to warm them up cold. So we didn't stay too long.  With that view, though, we definitely want to return when more has melted, the wildflowers are around, and we can actually hike.  Oh, and the viewing platform was in British Columbia.

Quite an adventure for one day!