Disclaimer: Terry neither took nor edited these photos.

After last week's aborted attempt to hike Wasootch Ridge, I realized I needed conditioning - more hiking. Everyone else in the family had other plans for the day, so over the weekend I took myself to Ha Ling. First impression: wow it seems like the road to nowhere as you head towards. I worried the potholes would break the car. Second impression: I was surprised and delighted to find a parking spot in the parking lot. Third impression: nobody should hike in the mountains in April without decent ice cleats and yet a full half of my fellow travelers lacked them. As some careened down steep parts I feared I'd be knocked over like a bowling pin. 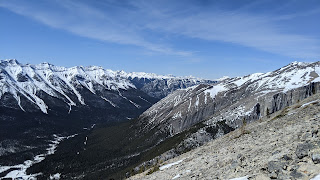 This hike completely  kicked my behind - I played a guessing game about which body parts would be sore the next day. (Spoiler: more parts than I expected)  It was steep and challenging. All the scree at the top made me fear falling off the mountainside. During the hike, all the nice firm ice the cleats could dig into warmed up and became slush that provided no traction. The downhill was nearly as treacherous as the uphill was. It was AMAZING. 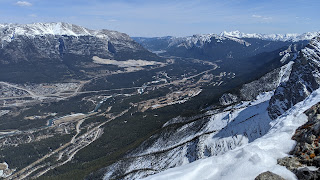 At the top, I was sitting on the rock ledge you can see on the bottom right of the above photo. The snow you see just above it is a relatively thin icing, the other side is just a massive cliff. 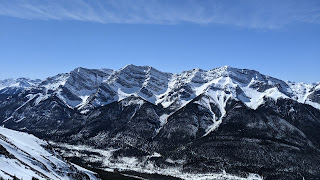 These are the mountains I could see during the entire hike once I got above the tree line.