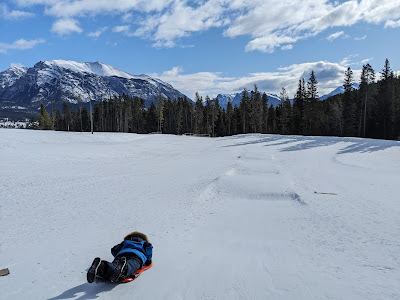 Our low key Monday was meant to focus on a ski slope in Canmore that had a sledding hill and skating rink. We figured we'd have some winter fun, cut it short when Zoltan got cold (his boots didn't dry completely), lunch in Canmore and head home in the early afternoon.

We got to the slope and parked at what turned out to be the far end from where we were. When I asked a woman in the parking lot where the sledding hill was, she pointed the way then said "just follow the bloody noses". Confused, I followed the direction and found the hill shortly.

The kids took a few runs, which were longer but a gentler grade than they had gotten used to. On the side there was a steeper grade, which also included a curve and a pretty steep drop off if you missed the curve.  The kids regularly missed the curve, although at first they veered off after already entering it.

Then came the run when Alex missed it practically from the top. The drop was probably four feet or so. We saw her stand up, then seem to crumple down. Terry first, then I raced down to check on her. She said it hurt to breathe and she was having trouble gathering her breath. She could move all fingers and toes so we were slightly less panicked but had her rest a while. When she still complained, we called a local clinic to be sure they were open on this holiday and let them know we were coming.

Have I mentioned frequently enough what a relief it is to have universal health care? We could worry about whether Alex was OK and not what the visit would cost. In the end she was perfectly fine, just a bit bruised and very shaken up. By this time we were hungry and she was OK so we hit a local restaurant for lunch.

Graze was well reviewed and conveniently located to where we could find parking.  The food was tasty, the owner roamed the floor to make sure everyone was comfortable and well served. I was particularly impressed when he came over and said the meal had taken longer to come out than he preferred and our beverages would be comped (it did feel like the kitchen was oddly slow, and I was very impressed and touched at the gesture. We'll be back).