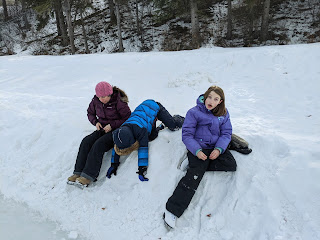 Looking for open ice places to go skating, I stumbled upon the Bowness Park Lagoon. Having no idea at all what to expect, we packed up our skates and headed out.

There is a section of open ice across a wider part of the river. Two firepits lined one bank of the river and a hoarde of very young kids congregated in that general area. At one cleared end was a pickup hockey game, at the other end was the entrance to the "skate along the canal" portion. I thought it would be like the town in Quebec I've read about, with kilometers of trail and hot cocoa stands along the banks. It was not that - it only took a few minutes to get to the end of the cleared portion of the trail, but it was still very fun. My highlight was the woman on skates pushing her stroller along the canal. I later saw a couple of other parents with their strollers on the ice.
Posted by Lynne at 8:00 AM