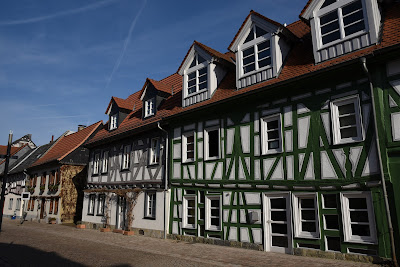 When Terry was here for the kids' last vacation, we had a weekend in town before leaving for Malta. Wanting to get out a bit more than we have in the Frankfurt environs, I suggested we check out Idstein. We had budgeted just a tiny bit too much time - we were tired and ready to eat before restaurants opened for lunch, and lunch was over before the tourist information center opened to hand out the key to the Hexenturm (the "witches' tower" that I had missed in my previous trip).

But, before the tired grumpies took hold of the kids and turned everyone into monsters, we had great fun wandering through the very charming city and all its half-timbered houses.

There is a building that had a series of medallions set in the plaster depicting Johannes Gutenberg's apparent presence in the city and work on the famous press. We also stumbled on a larger stumbling stone than we had previously seen, because this one commemorated the destruction of an entire synagogue.
Posted by Lynne at 9:00 AM