Next stop was Rothenberg ob der Tauber. It is highly recommended among the Frankfurt Consulate Community and I had been saving the trip to do when the whole family was here. The city's oldest part was built about 1000 years ago, and it is a walled city that has retained its entire wall. 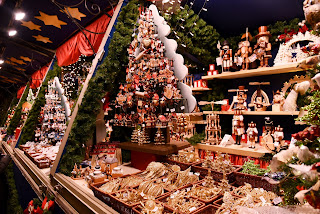 We also planned to pick up a couple of holiday gifts at the homeland of Käthe Wohlfahrt, the company whose wooden Christmas items have graced pretty much every Christmas Market I have ever attended. The store can be a bit overwhelming, and it is sort of set like the Duty Free section in an airport - you're forced to walk through every single section from entry to exit - which can be annoying when a child needs the bathroom in the middle of the store and you have to wind your way through half the store just to get out the door (apparently no restrooms for customers there).

Between the bad weather and the too-short amount of time budgeted to this town, we didn't do half of the wandering we'd have liked to do. The Christmas market was darling. The highly recommended Night Watchman Tour, starting at 8pm, was everything we'd been told it would be. The man who runs it has a wonderful theatrical presence, even with a crowd of 50+ people he can be easily heard and the information he relays is interesting even to the kids. It was Alex's favorite part of the trip. We will absolutely make time to go back once more before we leave Germany.
Posted by Lynne at 9:00 AM