Terry was here for the kids' winter holiday (which is still ongoing, entering its third week, dear Lord will we survive this much togetherness?) To celebrate the last winter in Germany, we went a-Christmas Market-ing.

Stop One - Köln. Home of the only decent Ferris Wheel we saw the entire trip. In hindsight, I feel a little bad about only letting the kids go on once. The Chocolate Museum was decent although compared to other museums on the trip, pricey for what it was. A major highlight for the kids was, as usual, the bunk beds in the hotel room. Köln Cathedral never ceases to stop me in my tracks, although this was the first time I went inside. 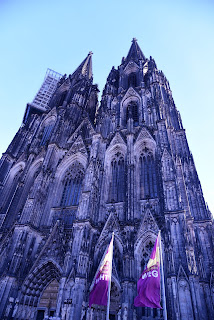 On our way to Köln the train was switched out for another train that was exactly the same except the car numbers were different which means that no reservations were honored. Thankfully we were able to secure identical type seating to what we had paid for so no complaints. On the return trip, however, we got to the station too early so when we saw that train was also switched out I went to the DB travel office to see if we could switch to an earlier train given that our reservations didn't matter anyway. The lady first explained that I couldn't switch us to an earlier train because of the class of ticket we had purchased ... but ... we could depart on a train that left 30 minutes after our scheduled one, and arrived 30 minutes earlier and have the exact same type of seating to what we reserved. Customer Service!!!

* Tip to the wise: Frankfurt to Köln can be a 1 hour trip or a 2 hour trip, so pay attention when booking tickets.
Posted by Lynne at 4:56 AM