A couple of weeks ago we had a very "eh" kind of weekend. We had a lot of chores to do after having neglected the house for several weeks. I had to wake up extra early on Saturday to get the fourth tire put on my car before it ships to Germany (a rant on that coming later, maybe) so the day just couldn't be recovered after that. By Sunday evening the kids were snarling balls of emotions - they sniped at each other, then cried when the sniping got turned around, they whined and complained, and generally acted like two children who had barely left the house all weekend.

So I said "Get your shoes on, we're going into the woods."  Because nature makes people happy. Here's just one of many articles on the subject.

The kids whined and complained, although now their target was me rather than each other. They staunchly insisted they would be grumpy and miserable throughout the walk. I said that's fine, as long as it's outside in nature.

A segment of Rock Creek Park is just about two blocks from us. One grumpypants was already cheering up by the time we hit the corner of our block. The other grumpypants is more focused and dedicated and it took longer. 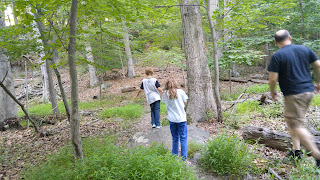 We discovered a million wild raspberry bushes, with the berries just starting to form (we also found three dark red ones to taste).  We captured fireflies (something I never did as a child, I don't even remembering seeing them up north). We made plans to come back with proper firefly catching jars, with mesh tops so they can breathe. We saw a couple of deer in the woods, until we scared them off. The serious, dedicated grumpypants decided with me that we should try to get into the woods as many evenings as we can after dinner.