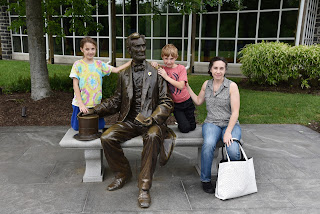 For the first time that I can remember, there were no illnesses or previous commitments, yet we did not spend the long weekend at the cabin.

Sunday we went to Gettysburg - it's only about 1.5 hours from home and I've been wanting to see it - this weekend seemed an appropriate time. On the way we listened to a podcast about the battles, which was useful as I could explain things from the podcast while standing in the battleground.

Gettysburg does this great thing where kids get a Junior Ranger booklet with information about some of the major sights, things to look for, and puzzles and games.  It definitely helped keep them engaged. Walking around downtown Gettysburg itself was also interesting, with all the buildings marked "Civil War" and trying to imagine what the town would have looked like back then.  We played "what wouldn't have been here" - cars, electricity poles/lines, the road itself.

Then on to visit Terry's sister and watch a minor league baseball game in her hometown.  There were a number of rain delays, but the game was never canceled. There were fireworks after the game, which was also fun. In general, it ended up a late night, but the kids surprised us by sleeping late the next day. Wins all around!
Posted by Lynne at 7:51 AM


Amazing! This blog looks exactly like my old one! It's on a totally different subject but it has pretty much the same layout and design. Excellent choice of colors! capitalone com login