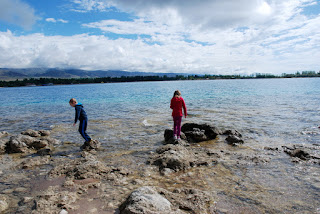 On our fourth day we made the trek to Bishkek.  Our first stop was the honey stand we had passed on our way to the lake, where we bought a kilogram of our favorite type of thick white honey with a consistency reminiscent of marshmallow fluff, but with better flavor.

Our second stop was at Burana Tower, a major tourist spot seemingly near nothing.  It had been a minaret, and now provides a lovely view of the nearby landscape. The steps up the tower are startlingly steep and narrow;  none of the steps were wide enough for me to stand on it without my toes hanging off and I have tiny feet. It was also pitch dark in some parts that weren't close enough to a window. Terry got claustrophobic and we decided the climb would be too much for Zoltan so Alex and I forged ahead alone. Good decision too, Alex and I went down mostly on our rear ends, gingerly feeling for one step and then the next in the darkness.

Beside the minaret, there were ruins of three mausoleums, a souvenir shop where Zoltan bought a keychain and Alex bought a miniature whip, and an interesting "artifact path" for lack of a better descriptor, which made something of a U shape with one side a lane of balbals, one side a lane of petroglyphs and one side a lane of what looked like stone wheels. There were also wide open fields to run around in, some hills to climb, and all around loveliness.

Departing Burana we had a relatively short and uneventful trip to Bishkek, where we found the manager of our apartment rental with relative ease and got ourselves settled in the first housing where we'd stay more than one night. We had received an SMS the day before that the original apartment we'd chosen was having hot water problems and we would be in a different place only one block away. The apartment we were put into was a one bedroom (like the original) with pullout couch and a cot in the living room and 1.5 baths.  My only complaint would be the skimpy kitchen set (two sharp knives and no butter knives?) but otherwise it was perfect. Easy walking distance to many things, plenty of room for us and our luggage, everything worked (the wifi occasionally cut out for a bit but it wasn't too bad).
Posted by Lynne at 10:57 AM

I have enjoyed reading through your blog! I noticed you frequently mention a thick white honey that your family particularly enjoys. I don't know if it is exactly the same thing (having never been to Russia or Kazakhstan, but it sounds very similar to the creamed honey widely available in the US. Happy honey hunting!