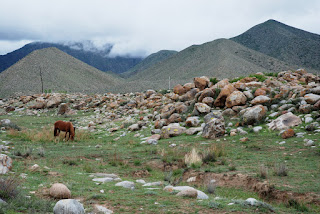 If you aren't going to experience nature, and between the rain and the chill we weren't, there isn't really much in Karakol.  When we got up we took a quick trip to the Dungan Mosque - a mosque built in the old method without using any nails, and also, curiously, built and painted to look like a Chinese pagoda.  The imam came out to greet us, ask where we were from and caution us that we were not allowed to go inside but could take photos.

Then it was a relatively direct road to Cholpan-Ata, the main tourist epicenter of the lake. We got to the town around lunchtime, then checked into our hotel, then headed out to the Petroglyph Museum.

"Museum" may be an overly generous term. It was a nearly deserted enormous field studded with rocks, some of which had little placards by them with some information about the petroglyph beside it. There was nobody around, but the gate was open, so we figured we would start looking around and presumably at some point someone would come by to charge us the admission fee.  We saw a guy on a horse in the distance, and waited a bit for him to come closer, but it turned out he was just a farmer and he went right past us out the gate with a young ram laying across the saddle in front of him.  We saw a small herd of horses, many of which were accompanied by a foal. And, eventually, a woman came up over a small hill to take our fee, ask us where we were from (for statistika, she said) and give us a bit of the lay of the land as well as the warning not to step on any of the stones. She seemed happy to be practicing some English, and bade us farewell after letting us know that about 70% of the glyphs depicted goats.

Due to the ominously dark sky and forecasted rain, we headed straight for the far end where a few balbals stood. then worked our way back to the entrance.  We had the kids scouting for signs, and then they had to find which rock had the picture carved into it, and guess what the picture was (some of the glyphs were better preserved than others).  The fresh air and open sky were the perfect antidote to too much time in the car.
Posted by Lynne at 10:30 AM