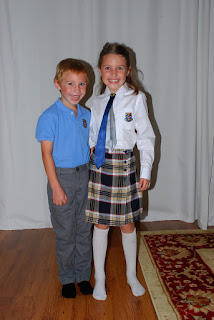 September 1, the Day of Knowledge, is a traditional first day of school in at least two countries where I have lived (Russia and Kazakhstan).  Today the kids met their teachers, listened to a lot of speeches, and then went home by lunchtime. Tomorrow will be the first real day of school.

We're happy that Alex's class is pretty much still together, and one of the very few new kids is another American!

Zoltan snagged a class with several friends, so although he was nervous and grumpy, we think he will settle into class faster than if he'd been with a full slate of strangers. Of course, one thing that makes it easier is that we don't bring him in - he rides the bus - so he can't cling too much.

Alex, in Key Stage 2, now has to wear the blazer and house tie. Appropriately, we just watched Harry Potter 2 over the weekend so she liked pointing out the similarities in attire. Edmonstone is most like Ravenclaw because it has blue. (And Ravenclaw is the house for the cleverest pupils ... and, you know ...) Sadly, Haileybury has no cloaks. I'd dig cloaks. I wouldn't even complain about the ridiculous prices if it were for cloaks. 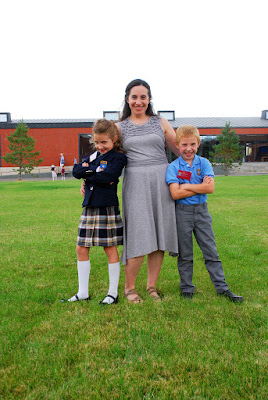