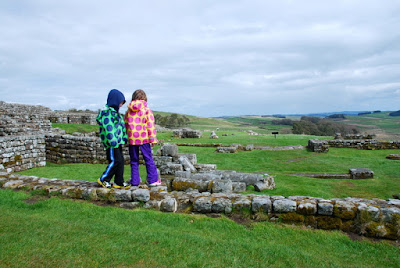 You just can't spend time in northern England without checking out Hadrian's Wall. And it turns out one of the better sites is one of the closest ones, and of course we wanted to stick close to home for the first day (everyone needed a nap, you know, after the long, started-at-4-am-travel).

We stopped in the gift shop because that is also where you buy the tickets (clever, eh?) and Zoltan immediately fell in love with the swords.

It started raining as we walked the half mile to the actual site - it was a former Roman village on the wall plus a little museum - so we stopped in the museum in hopes the rain, rain would go away.  The kids found the dress up area then became little menaces to anyone who got too close as they might have accidentally hacked off an unsuspecting arm if it happened to fling itself into their swordfight. Thankfully, nobody was slain, or even maimed. By the time they got a little too boisterous, the rain had stopped and we went out to enjoy the site.
Posted by Lynne at 11:53 AM