We did our research and knew Helsinki airport had 4 children's play areas. Two were within an easy distance of our next gate so we wandered toward the farther one, as we had 3 hours to kill.
Small, but very well done. Here's some photos. 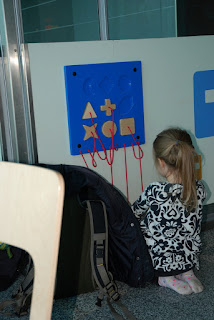 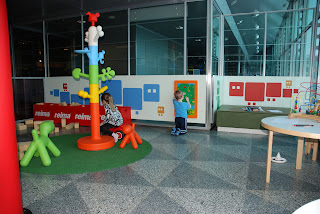 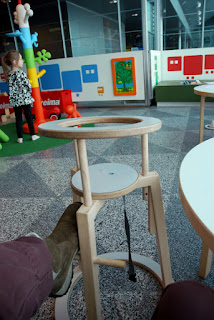 Note to American airports and businesses catering to children:  In most of the major airports in our country, there are plenty of pockets of dead space about the same size as this play area. This one was sponsored by a manufacturer of winter clothing, they had their logo everywhere and also had stacks of their catalog within the rooms. Brilliant. If we ever end up anywhere cold enough again, we are likely to buy this company's products. It's a huge win-win situation.

But I digress. We gave the kids about an hour in the one place, then moved them to the closer-to-out-gate space, which was a bit smaller. Between the play areas, eating, and watching planes come and go, the time passed quickly.

We left the house around 11am local time, and got to the hotel 11 hours later. A bit annoying as we were only in the air about 2.5 hours, but it gave us a dry run for our PCS and other future trips and I am so proud and amazed at how far the kids have come as travellers. We had a Trunki and a roller bag for their carry-ons and they actually fought over who got to roll the roller bag rather than who got to sit on the Trunki. Their moods stayed relatively good even as naps got missed and healthy food not eaten. Because we knew we didn't have a lot of airtime and the airports were entertaining enough we brought little in the carry-ons - little enough that just about every snack got eaten and just about every toy played with. Success!
Posted by Lynne at 11:32 AM