It seemed random enough, in Tver there is a monument to the liquidators of the Chernobyl disaster. Then I went to see it, and it turns out more than 2500 people from Tver went to Chernobyl to help with the cleanup. Hence, the monument.

On the way to the monument I saw a strikingly colored building that i first thought was a church and then realized was the mosque. It was pretty so I took some photos. 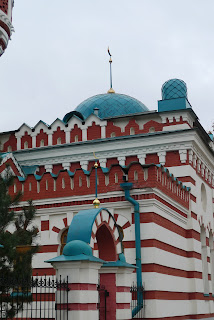 The little park the Liquidators monument is in is right next to the mosque.

As I walked toward the monument I could see an older man sitting on a bench right in front of it but didn't think much of it. I read the notice about the monument - handily in English and Russian, and I took some photos. The man started speaking to me. He asked if it was interesting to me and if I understood what it was for. I said yes, and then he told me he had been one of the liquidators. He said lots of other stuff I didn't understand. I asked about his health after being there and he said it was ok then something about his friends so I imagine some of them didn't come out of it so well. he then showed me something, it was clearly an official document, had his name and photo and it was in a case like we would use for ID or Russians use for their passports but it was just the 2 cards/pieces of paper, one on each side. When I got to an internet place and looked up Liquidators of Chernobyl, Wikipedia helpfully explained that special certificates were given to 600,000 workers who helped with the cleanup, so I imagine this is what he showed me. 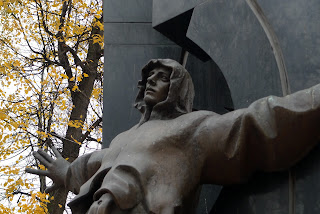 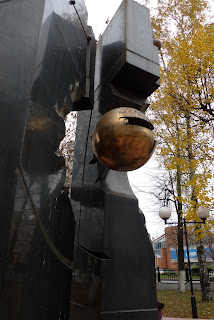 The gentleman then offered for me to take a photo of him with the monument so I did. 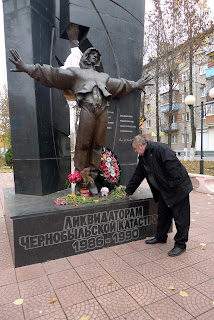