It just doesn't sound that exciting, does it? My geologist friend aside, what could be interesting to see at a mining museum? And nobody who'd been before could really describe what was so special in a way that made it sound very special ... so here's my attempt as it is relatively fresh in my mind.

Our contact met us at the front entrance, brought us in, and gave us some history. The Institute was founded in 1773 by Catherine II and was originally only an educational academy. It was part of the military so the students all still wear uniforms, although they no longer give swords to the #1 student each year (we did however get to see one of such swords in a display case).

Then our tour guide came and we began with a visit to the special exhibit room, which houses the prize items in the collection. There's a shelf of Faberge figures... 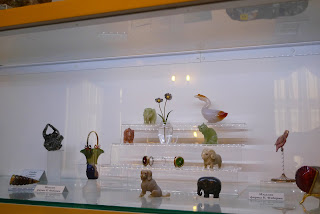 ... another sword on which is depicted all along the blade/scabbard a famous battle ... 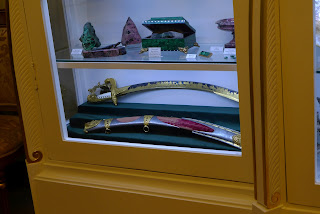 ... a collection of raw silver and gold nuggets ... 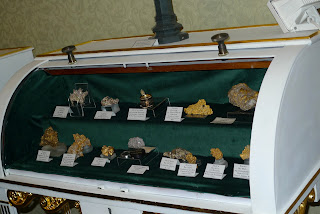 ...then on to the main collection.  I totally dig the enormous hanging periodic table and already plan this will be some year's science project for one of my kids. 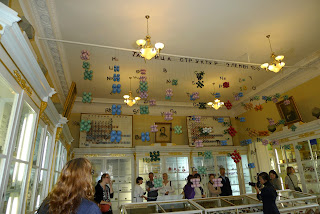 There are rows and rows of cases of rocks. Our guide picked out the most important or interesting ones to tell us about. There's a display showing synthetic rubies and sapphires next to natural ones. We learned that only blue topaz will keep its color against constant sunshine but yellow or other colors fade. We saw marble statues and learned about the type of marble that makes figures of people look so real. If course I forget now, but there's some quality of it that lets skin actually look like skin. Don't you want to pick up this happy baby? 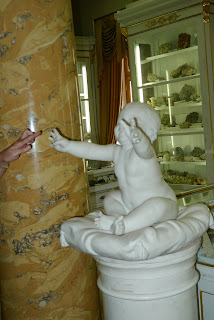 We learned that minerals are individual molecular forms and rocks are composed of composites of minerals.

This table has a bronze bottom crafted here in Russia and the top is a piece of petrified wood from Arizona (and now, again, all I can think is "There is no ... Arizona ... no Painted Desert, no Sedona...") Wood gets petrified when it is buried deep into the earth, such as from an earthquake, and the minerals in the earth seep in and cause chemical transformations. Did I mention this is really pretty? 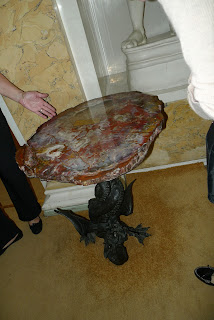 This is a stone that when you strike it with something metal - we had a key - will ring like it's metal itself? 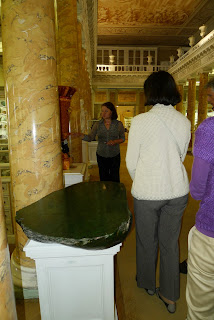 And what's not to love about a Russian Imperial crest made of forks and knives? 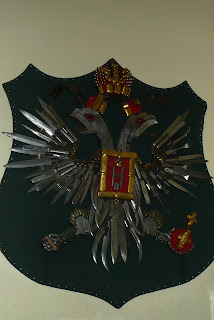 We got to see a number of pieces of mining equipment - most are models of real sets as the stuff is quite big but some is the original. That's 400,000 year old water in that glass jar, came from more than 3 kilometers down in Antarctica. They found bacteria down there that actually came back to life when they warmed it up. 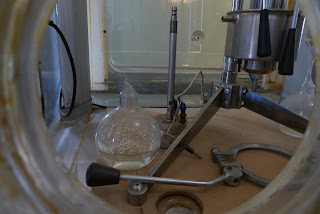 In a part where we can't take photographs I saw a huge gold nugget about the size of a newborn baby that weighed more than me. We saw a part of an iron meteor (did you know meteors are rock, rock/metal, or metal?) that weight some large number of tons and learned it came from a meteor shower that happened about 60 years ago, whch means we're in luck as they only occur about every 200 years (they do a LOT of damage).

For those who want to check it out themselves, the place now opens tours to the public at 11am and 1pm every Saturday. Tours are in Russian of course.