What are the Buddy Bears? In Berlin in 2002, someone got the idea and artists started decorating 2 meter tall bears. According to the web site, there have been various iterations over time - at first the bears were on all fours like the Einstein Bear still is, now they stand with arms up "holding hands". In its present form, there's a Buddy bear from every member state of the UN and they tour around the world promoting tolerance. Except when the 4 year old gets bored, runs off and can't be found easily. Then, there's very little tolerance for such behavior and we go straight home.

We tried to get photos of the kids from each country they have visited, unfortunately they got bored about 4-5 photos. Alex announced she wanted to only shoot with bears she liked best, then made a beeline for Sudan. Which of course was next to the USA (It comes next alphabetically in Russian). Here's a snippet of what we did manage to get.


We tried to get photos of the kids in front of the countries they had been to, but Zoltan refused to move out of the way for this one. Oh well, he will get to the UK one day and then this will be accurate. 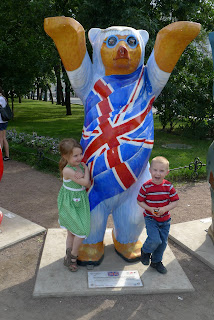 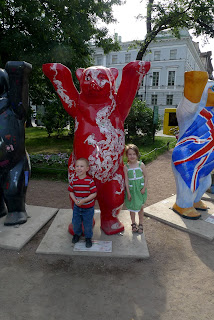 Kids riding the Einstein bear. See Alex being a good big sis and holding on to Zoltan so he didn't fall off. 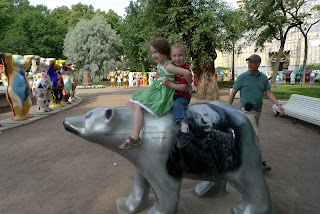 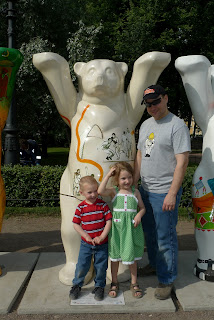 Russia. Note that it's just Z and me. This is because this is when Alex ran off. I love the Khohloma design. 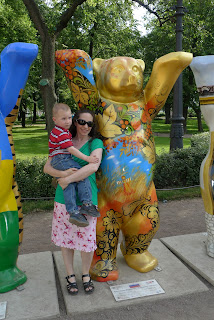