We're Friends of the State Hermitage Museum. That means that in addition to getting in for "free"* and being able to go past the long lines, we also get invited to regular evening events. For many reasons we've never actually attended one of the evenings, but December is the 15th anniversary of the Friends Club so I booked the nanny and told Terry he had to wear a tie and planned to go.

Well, Terry's been sick with nobody-knows-what and it turned out I knew a whole group of ladies who were leaving their husbands home so he got a bye, we canceled the nanny, and I went alone. Due to my uncanny ability to get lost going a straight line, I got there later than planned. After checking my coat and the fancy shoes I planned to wear, then showing my invite to a dozen people, I was haphazardly included in a group of people following a Russian speaking tour guide through a new exhibit I'd never heard of and that I think Terry would really like. As I was completely ignoring the guide due to my complete inability to understand what she was saying, I did catch an earful of English coming from a different corner and glommed onto that tour group.

The tour went on for about 1/2 hour and then we were led into the Throne Room, where the director of the entire museum gave a speech. We thought we would then hear the concert and eventually get a canape or glass of water but instead we hung out in a large otherwise empty room while a trio or quartet played (I forget which) and nobody paid much attention, which is a shame as they played well. Our tour guide eventually rounded us up and another 30-40 minutes went by as we toured a different special exhibit that I also have to bring Terry back to see. At this point, however, we were thirsty, hungry, with aching feet and getting grumpy.

Just at that time we were led into the atrium where the food and drinks were. We all got enough to eat to assuage our hunger, and I even got scolded by a Russian because I put my empty plate on the bench on which I was sitting. Completely uncouth and I may never be allowed to enter the Hermitage again! I was pretty happy to be so Russian-ignorant as had I known what she was saying I probably would have gotten upset. In translation it wasn't so bad although I did keep insisting my friend point out to the scolder the stain that was on the bench from before we sat down. 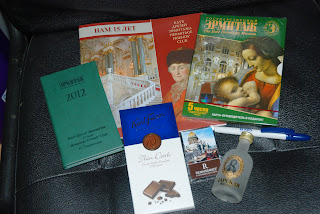 Time to leave, we gather our coats and things and note a very large quantity of plastic shopping-type bags and a couple of people who looked like they worked there. We almost walked right by, but then we asked what was in the bags. Turns out, it's for us! In addition to the Annual Report, we go a DVD, magnet, moleskin datebook, and yummy Frazer chocolate. A perfect evening all around, even if I could barely feel my feet the next day.

* it's not exactly free when the membership costs about a hundred individual visits, but I don't have to have cash on the day I go so in that sense it's free.
Posted by Lynne at 5:53 AM