Today was truly perfect. Alex went happily into her classroom at school. Zoltan even chose to wear his boots today rather than fight me for his sneakers. Traffic was normal, not awful. Garmin actually led me to my destinations.

First stop, the Grand Choral Synagogue to buy hanukkah candles. And, as I was there, a challah. Who thinks French toast will be on tomorrow's breakfast menu? Next stop, Hermitage.

Today the Hermitage must have staffed their dezhornaya nice-mean-nice alternating through each room. One lady smiled brightly when she saw Zoltan, chatted for a bit then gave what were clearly directions and a room number and said something like "On lubit" (he'll like it). Turns out that room held the suits of armor and replica horses, also armored. Another women gave me a nasty "neel zya" (not permitted) when I was showing Zoltan a painting, describing it by pointing to the different features, and I guess my hand went within a foot of the canvas. Horrors! 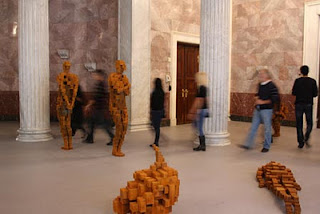 Completely by accident we got to an exhibit I've been wanting to see, Antony Gormley. His exhibit has 2 parts, one where he convinced the Hermitage to build up the floor in its ancient sculpture room so the sculptures are even with the visitors rather than being on pedestals, and the other part includes his own art. Zoltan had a blast with Gormley's figures, especially the one "laying down" (bottom right in the picture). He kept pointing to that and and yelling "lay down" and then to one of the other sculptures and yelling "stand up".

The other interesting aside is that my 2 year old has a real preference in art forms. If there were no paintings or photographs in a room he'd sadly say "no pictures" and wander through to see if the next room would hold "pictures." My budding critic!
Posted by Lynne at 5:43 AM