Turns out, you can go home again. Or at least stand outside and peek through the gates, Part 1 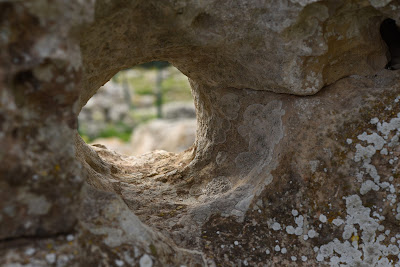 Ever since I was informed my next post would be Frankfurt, I have been planning to return to Malta and show Alex where she was born. The island generally, of course, not the hospital. That would be even more boring than the ancient historical pit where miniature hippopotamuses were found. Yeah, kids are too worldly and jaded.

Mid-February is the so-called Ski Break where apparently we're supposed to go skiing. Kids have never been, It's a great time to go to Malta, not too cold and there might even be rain. Between some issues with leave and Terry's ideas about how much time we actually needed to give to this venture, we booked a Tuesday to Friday trip. We also noted and kept marveling during our time there that we were returning to Malta within the week of the 10 year anniversary of our departure.

Day 1 - arrival mid-afternoon, discover that the apartment where we were staying expected the payment in CASH, and use almost every last Euro paying that. Find an ATM, replenish, and head off to my favorite city, Mdina. I really do love me a walled Medieval city. We wandered a bit before the sun went down, getting to the Bastions a bit late to watch the sun actually setting. The kids loved racing down the high walled narrow cobblestone streets of the nearly deserted city. We found a place for dinner, chosen because it opened before 7pm. Big reminder: Maltese food is rarely delicious and it's a near miracle to get out of dinner for fewer than two hours.

Day 2 - meant to be "see the sights" day. First stop, Ghar Dalam. It's a prehistoric cave that was filled with animal and human bones. There is a huge bone display in the museum area and a bit of information about the plate movements that led to Malta detaching from some other landmass (Sicily? Europe?) and the shrinking of some animals that were caught here as well as the enlarging of other animals.  Then you can go visit the cave. The kids were, as described above, absolutely not impressed. The ticket for Ghar Dalam also included admission to another prehistoric sight that was recently opened (within the last year) so obviously nothing Terry and I would have seen before so we also wandered down that way.  The kids insolently asked why we thought they would be interested. Ugh.

We decided to cut short some of the other sights we planned to see, and instead headed to Rabat and the Catacombs. When we got there we confirmed that although we had been to St. Paul's Church and Grotto we had never visited the Catacombs. With the kids' love of all things Roman these days we figured it would be a hit and it was. The Catacombs were marvelously done, with pavilions explaining an aspect of what we were seeing (for example, the different kinds of burial vaults, or the differences in how different religions used the spaces). The kids of course were thrilled with running in and out of the various vaults and places where lots of dead people used to be - bonus that it's underground!

As we had driven into Rabat to get to the Catacombs, I thought I recognized the vendor where I used to buy the crazy delicious Maltese nougat. After the Catacombs we all needed a treat so we visited the vendor, who offered us tastes of other treats we had totally forgotten, like a pastry that is what Fig Newtons want to be (dried figs, honey, nuts, I think some citrus, in a fresh buttery pastry crust). When everyone had made their selections, I also got as much nougat as I thought I could carry home. More than a week later I am still working on it and it is still as delicious as I remember. We took our treats across the street to a cafe for cappuccinos (mom and dad) and a non-dairy smoothie (kids). It was a moment where I was a bit astounded at how much we had remembered, as I don't recall going to Rabat even a dozen times and yet the town center felt very familiar.