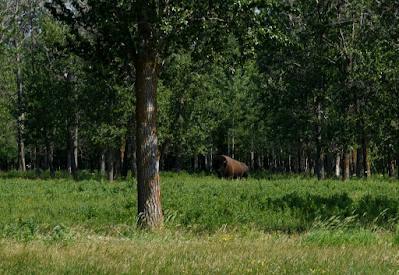 When all our beautiful B.C. dreams fell through because the border was not in fact open the way we thought, we cast about for something else to do over the long weekend.  Still having never visited the province's capitol, we decide to use some of the Marriott points burning a hole in our pocket and head up for a weekend.

The kids begged for a trip to Canada's largest shopping mall, the West Edmonton Mall - home of stores, of course, but also an indoor amusement park, an aquarium, and a water park. Having visited an amusement park the previous day, we settled on the water park. And it was a delight! We took no photos so this will have to do.  By the time we ended our day and checked into the hotel we were beat.

Next day was what Terry and I had wanted to see in Edmonton - Elk Island National Park.  To try to draw the kids in, we downloaded the geocaching app and found a couple of caches ... but the kids were not into it. Oh well. We also had planned to go in the water at the beach, but it was super silty/dirty and cold so that was also a bit of a bust.

On the wildlife side, though, it was a spectacular home run win. 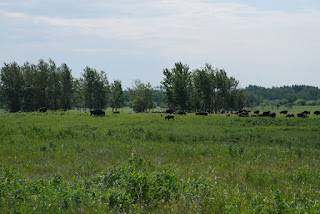 First up: bison.  The bison are a main attraction at the park, with a particular roadway known as the Bison Loop. From the parking lot within the Loop we could walk over to where there was a herd (about 50+ bison) of all mamas and babies. We kept a generously wide berth though, so didn't see much detail about what they were doing. And the babies were just little dark blobs.  As we continued on the loop, just after we had gotten into the car, we also saw a bull (male bison) who was just off the roadway. We watch him run a distance and who knew they run so awkwardly!  It was like a mix between a hop and a gallop.

We then found a picnic table where the kids could hang out and read while Terry and I took a little stroll to a lake ... that didn't actually have any water.  We went on a different path where the butterflies were continually taunting us with being really pretty but never stopping long enough to focus the camera lens. I guess they eventually got tired of that because a few did stop and let us take the pictures.

Last stop in the park (which by the way is not an island) was the beach. It reminded me a lot of the beach club near our cabin and was only slightly larger. Zoltan went in for about 5 minutes, Terry and I stood ankle deep for longer, chatting and feeling the sand and pebbles under our feet.  Then we decided to go for a wander, taking a few different trails and again leaving the kids behind to their own devices (but not electronic devices). 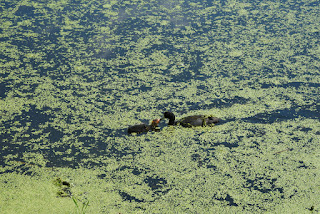 We watched ducks and their babies paddle about. Terry even caught a photo of a duck feeding its baby a delicious leech (ick!) We heeded one of the park signs to sit on a bench and listen to the wind and the lap of the waves.  We noted the number of fallen trees with telltale beaver gnawing signs and the number of lodges, from cozy to swanky.  We read a sign about beavers being most active at dusk and dawn and just as I finish saying "Well we're obviously not going to see anything at 2pm" we watch a young beaver swim by right in front of us!  We watched it go around a corner and it disappeared.  We continued our walk, and on the way back swung by the same spot where now the little guy was swimming in a different direction, going around a different corner, but clearly pushing a little stick. (obviously, it could have been two different beavers. But it was a pretty small one so it could have been practicing for when it's big enough to help build the lodge). 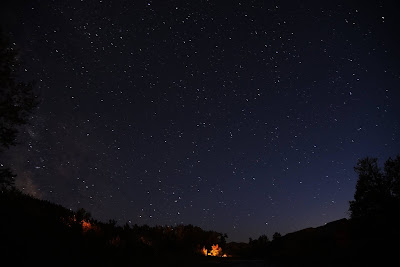 In a conversation about how awful we are as parents for forcing her to go on vacation, Alex gave an example of a small town where there is nothing to see or do but a few mushrooms.  I told her that in 20 years I will remind her she compared Vancouver to a small mushroom town and she will apologize and buy us drinks.

Alex likes having a particular place in the fridge to put her things for the next day's lunch, so she can just grab the stuff, pack it up and go.  She put a little note at one small corner but the sanctity of the space was often violated. So she put up the fridge equivalent of an orange cone. 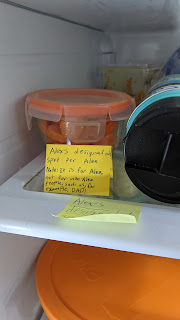 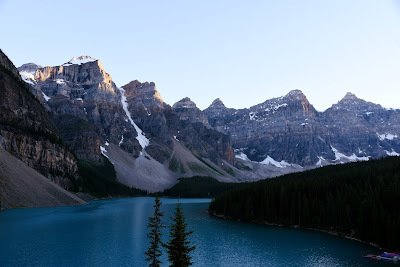 Super heat wave in Alberta, so what outdoor adventure makes the most sense? Taking the canoe out, of course!  We had been by Vermillion Lakes once before and realized the only way to really experience its beauty is being on the water.

We plan to leave at 10am. I run an errand that has me home around 9:15am and Terry informs me he can't find the essential strap for ensuring the car holds the canoe securely.  We split up and continue searching.  Still no dice. I let my fingers do the walking and go online to see if a store nearby has it. The closest Canadian Tire does not but a different one across town has five in stock. We decide it's also time to get the kids life vests that fit (last year they were under 90lb, if only barely) so I grab Alex for trying them on if there are different sizes and we set off. To make a painful story shorter, there were zero of this strap in stock. How?  I dunno. It's still tender when I think about it. With Alex in the car I wasn't doing anything other than heading home and regrouping.

We decide on the next best thing - find a beach! Many of the lakes and rivers around here are glacial or otherwise deadly to try to swim in so we find one that's 1.5 hours away, and should be tolerable to immerse in.  We re-pack for swimming rather than canoeing, and off we go!

Ninety minutes later it's the worst, most crowded beach "strip" area and zero parking within the ZIP code. We can see the beach and it is wall-to-wall people there too.  It's also past lunch.  Grumpiness all around.  We drive past all that, find a place to pull over and figure out our options. There's a Provincial Park up the road with a campground! At the very least we can expect a day use area with picnic tables. Off we go! 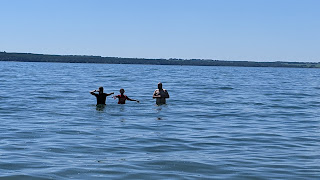 After lunch we're all feeling a bit better. Checking the map, there is definitely water nearby - the only question is whether there is a way down to it. After a couple of fits and starts, heading the wrong direction and righting ourselves, we find the water!  There's no beach, the hill basically ends a couple of feet before the water begins, but there's a bit of dry space for our stuff and a few other groups of people along this "shoreline" to proclaim that this is a legitimate access point.

Unfortunate for our late start, we could only stay a couple of hours.  The water was pretty chilly despite being probably the warmest beach around - Zoltan kept getting blue lips and we had to make him get out and warm up.  But we splashed around, swam a bit, and looked for rocks in every color of the rainbow.  And although she'll deny ever saying this, even Alex had fun. 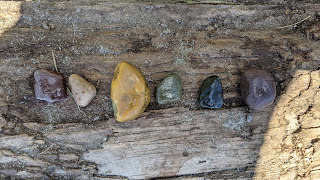 Just today, we pulled up a bunch of radishes partly because they were ready and partly because dinner called for them and we didn't have any (oops). The one on the bottom right is the biggest radish I think we've ever grown.  Some salad greens are also ready to pick. 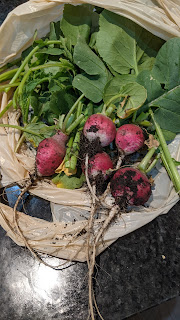 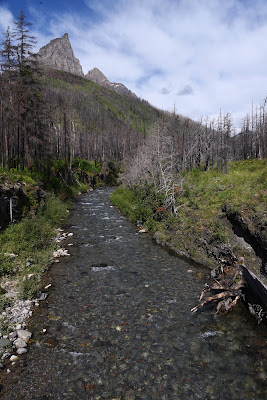 Something I have pretty much never done before - taken a random day off from work to do something fun!  A friend was celebrating her 50th birthday and wanted to do a hike followed by a lunch with a view. 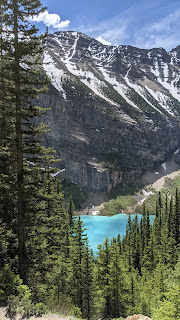 Lake Louise view from the trail

Lake Agnes lies above Lake Louise (you also pass Mirror Lake on the way up) and you start the hike from the Fairmont Lake Louise. Several other popular hikes start from here, and the parking can be impossible on weekends and/or in summer.  Thus, a weekday before schools let out was the perfect time.We also had the perfect weather, bright and sunny but not too warm. 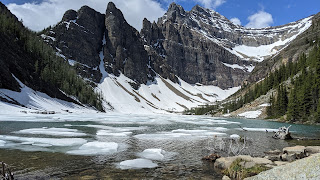 While sitting on a bench at Lake Agnes, soaking in the view, a very cheeky chipmunk scampered onto the bench right next to me ... then into my lap!  I held my breath while mentally telling the chipmunk "please don't bite me"... when I did not immediately put food in its mouth it scampered back off. Whew! 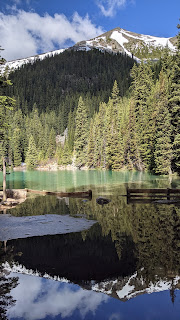 It's a mystery why they call this one "Mirror Lake"

We finished the hike at the Fairmont, with lunch on the patio overlooking the lake. Somehow I took no photos there but be assured it was stunning. The water is still the same turquoise blue that Alex swears is a result of dye.

Three hikes in one week!  Woooot! 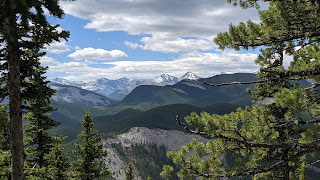 As said before, the family vetoes hikes with an incline. So, a little nervous about the possibility of bears, I clutched by bear spray tightly and embarked on one of the most popular hikes in the area: Prairie Mountain. I can see why folks love it - it is only an hour outside of Calgary and 7km round trip. It also covers 700m of elevation, or nearly 2300 feet, of elevation in that time. It is not for the faint of heart.

I tried my best to take many beautiful photos and they all look fake. They also don't nearly capture the view. This happens when all you have is a crappy phone camera because your husband, who wields the fancy (and heavy!) camera, decides not to join. 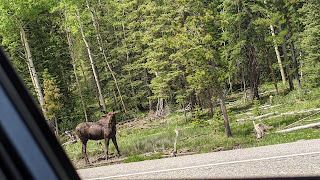 The summit has a perfect 360 view of mountains and the valley. For some reason my cell phone battery was dying quickly today so I didn't linger at the top past eating lunch. The parking lot for the hike is at the Elbow River so I did pop over there to dip my feet before driving home. Just a bit down the road, I saw a ton of cars pulled over on both sides and assumed there was some hiking trail with an insufficient parking lot. The camper in front of me was trying to maneuver because some of the cars hadn't pulled over all the way. Then I looked to my left and saw this handsome fellow. I pulled over (all the way) and took a couple of quick shots before heading on my merry way home.

Moose and mountains, is there a better way to spend a day?