I have written about paying $10 for a small bunch of asparagus in winter in St Petersburg so that I could consume vegetables other than carrots or cabbage; my cred as a non-hater shall be considered well established.  Spargelsaison ("asparagus season") in Germany is a real thing, and it is incredible to me that people will pay 20 Euros for a serving of asparagus in a restaurant at the height of the season. In a normal restaurant. Supply vs. demand anyone?

Asparagus is tasty.  White asparagus does have a milder, more delicate flavor. No arguments here. But ...

The thing is, during the Spargelzeit ("asparagus time") it is mid-to-late-spring. There's something else going on too, something that should be the queen of the season and somehow, bewilderingly, is not. I have been tragically and pathetically lazy. Next spring will be different.

The field I visited this morning was a 10 minute drive from my apartment. You can buy a box there, or bring whatever kind of container you like and they weigh it before you start picking, so that you are only paying for the fruit. The prices were excellent too, with reduced cost the more you pick. We may go back to jam making next year!

Today was my first and only (for this season) strawberry-picking day. Sadly, many of the berries on the vine were already moldy or half-eaten by the bugs. Unfortunate for the fruit seekers, although it is a great sign of little or no pesticide use.  It took about 40 minutes to gather about 1.5 kilos of fruit. While picking, I only snacked on the ones that were so close to being bad nobody would have taken them. They tasted like honey, they were so tooth-achingly sweet.
Posted by Lynne at 5:27 AM No comments:

One Sentence Book Review: The Power

The Power by Naomi Alderman

When girls in the modern-day world suddenly gain the power to electrocute through their fingertips, their actions repudiate most gender stereotypes and set civilization on a crash course that, five thousand years later, looks starting similar to our own with one small exception...

Buy, borrow or don't bother: Borrow.
Posted by Lynne at 2:01 PM No comments:

(full title) Journey: Based on the True Story of OR7, the Most Famous Wolf in the West by Emma Bland Smith (Author),‎ Robin James (Illustrator)

This almost non-fiction book charmingly tracks the adventures of OR-7, the first wolf to cross into California in almost a century, and the campaign to protect him from aggressive farmers and other humans.

Buy, borrow, or don't bother:  Buy.  This would delight your favorite five-, six-, or seven-year-old paired with a stuffed animal wolf!
Posted by Lynne at 11:32 AM 1 comment:

One Sentence Book Review: Beyond Sleep

Beyond Sleep by Willem Frederik Hermans

Overly self-conscious and self-important young geologist, carrying the weight of his father's too-early death and resultant failure to achieve greatness, goes on remote site visit critical to his thesis completion yet is painfully unprepared for any aspect of his journey.

This book will delight anyone who has ever wondered just how will the world look in about 120 years when no entity on Earth seems willing or able to do anything to slow the pace of climate change;  the author fits in descriptions of extreme weather, human scientific and social ingenuity, and political showdowns in between the stories of the small group of fellow megalithic-city-within-an-apartment dwellers who change the world.

Buy, borrow or don't bother: Buy - and keep checking back over the next 120 years to see which predictions come true!
Posted by Lynne at 11:20 AM No comments:

The Graveyard Book by Neil Gaiman

This children's book first appears as a thriller - the protagonist's entire family is murdered in the first few pages - but instead turns into an adventuresome coming-of-age story (albeit under unusual circumstances) that has both children and adults constantly wanting to know what happens next.

One Sentence Book Review: A Gentleman in Moscow

A Gentleman in Moscow by Amor Towles

Imagine your favorite Russian writer got himself a good editor:  reminiscences about the scent of lilacs in the Alexander Gardens or waxing philosophic about why Russians took to duels so quickly still happen, but within one rather than 20 pages.

Buy, borrow or don't bother: Buy
Posted by Lynne at 3:07 PM No comments: 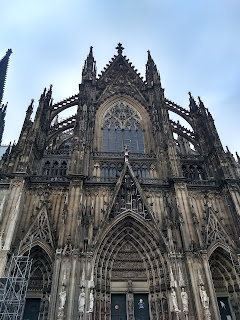 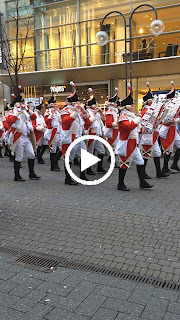 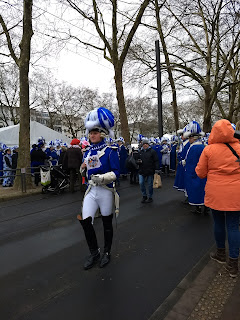 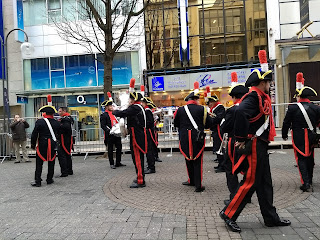 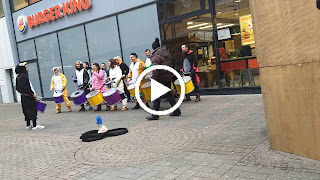 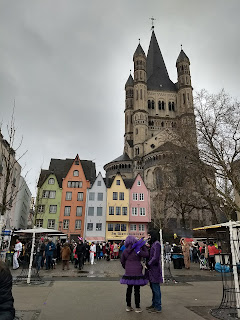 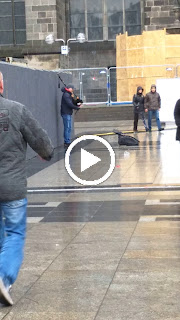 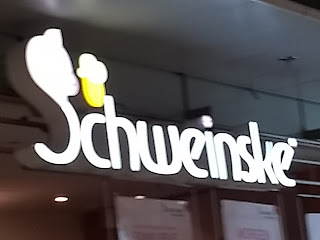 One such hoop was Maryland state taxes. We dutifully filled out the online application form and waited to receive the tax rate we should pay and the necessary form to use when submitting quarterly taxes. Instead we received a form saying that we didn't need to pay Maryland taxes for the first quarter as we didn't meet the minimum threshold. I thought we had paid more, but it was only a couple of weeks in March before the quarter ended so maybe they were right. I cursed them because I knew it meant I had to do it all over again for the second quarter, because if they didn't think I owed taxes they probably wouldn't be set to send us the necessary forms three months later.

And this week I received a notice that our first quarter taxes are delinquent and we are being assessed a penalty for failure to pay. And because I lost the first letter (Ironically, it got lost because I carried it around with me trying to reach the person who sent it to confirm, because I didn't think it was right. My voicemail was never returned so I had to keep trying to reach a human being and never managed.)

I called the Maryland Comptroller's office and was basically treated like a liar. If I don't have the letter I don't have proof.

Somewhere in the computer system of the Maryland Comptroller's office a copy of this letter must reside. Unfortunately the office is backlogged and a response to my inquiry could take as long as 5 business days.
Posted by Lynne at 9:08 AM No comments:

I've been in Frankfurt more than three months,and although I have been back to the USA twice and taken another trip by plane within Europe, within Germany I have barely left Frankfurt.

Today I took advantage of the holiday (500 years since Martin Luther nailed his 95 theses to the church door and thus ushered in the Reformation) and took myself to Heidelberg.  There is a weird thing with the Deutsche Bahn - ticket prices to places that are within about a 2 hour drive are ridiculously expensive, so it doesn't make any sense to take the train even when one would prefer to do so. So, my first road trip. 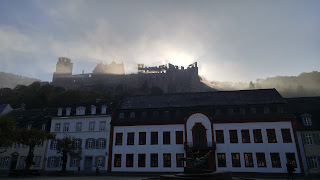 This is the Academy of Sciences building, with the Heidelberg Castle lit up through the fog behind it. I am sure Terry hates this photo. I love it. The photo was taken basically right where I found a parking garage for the car.

I first hiked my way into and around the Philosopher's Way, so named because the university professors of old would come up into these woods and wander.  I had thought the name referred to a particular path, but soon changed my mind. The trails kept splitting off, signposts existed yet directed to places I had never heard of and none of them said Philosophenweg ... so I guess the term refers to all the forest paths. 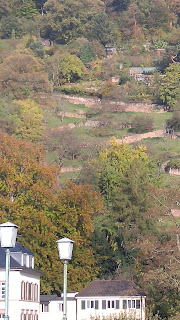 This is the path up the mountain to the start of the Philosopher's Way. This path is called the Schlangeweg, or Snake Path. 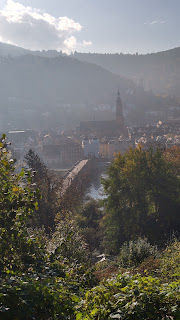 The views were amazing, but hard to capture. This is Heidelberg's famous "old" bridge leading up to the Church of the Holy Ghost.

My morning in the mountain air caused (as the Germans say) a bear's hunger, and I managed to find a little pub-like restaurant a tiny bit off the main touristy area. I intended to order schnitzel  - they had three different kids that weren't pork as well as about 6 different kinds with pork, but then they had venison goulash with a berry sauce and spaetzle. I was sold.

After lunch, off to check out the castle. I didn't plan to actually go in, wanting to save that for a time when Terry and the kids are with me.  The entrance fee is actually due at the courtyard of the castle, so I only walked around a bit. It looks like it's half crumbling and there's plenty of nooks and crannies. The kids will love it. 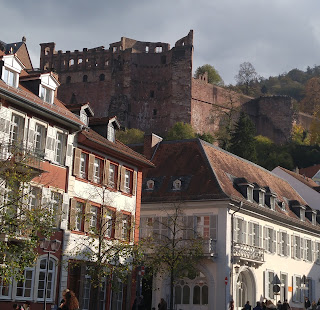 There it is, looming over the town.

The last part of the adventure was getting gas for the car. There's this perk where when we use a special card at certain gas stations, we can get gasoline without extra taxes. These extra taxes add up to about half the cost of the gas. I wasn't completely convinced on how this was going to work, so I didn't fill the tank all the way. But it worked! Unfortunately it also entailed a detour that added 20 or so minutes to my drive home. Driving in Germany is a bit harrowing, for example I'd be driving 80 mph and have cars FLYING past me. That takes some getting used to.
Posted by Lynne at 2:24 PM No comments: