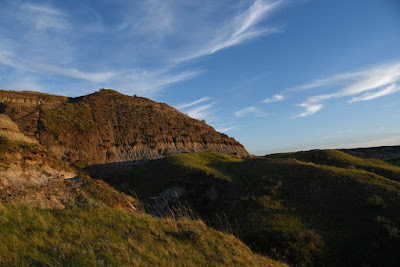 We enjoyed the fall trip to Dinosaur so much we decided we wanted to spend a night or two by the hoodoos. Through determination and perseverance normally only seen when scoring concert tickets, we were able to secure the very last campsite for the dates we wanted.

When Friday rolled around, the weather promised to be erratic. Chances of rain and thunderstorms. We were going to be using our new, amazing, enormous tent and have definitely not gotten down the "set tent up in 5 minutes flat" routine we worked our way towards last summer. So, we decided to postpone until Saturday morning.

Saturday promised to be a beautiful day, but first we had to get out the door!  Camp-car-packing Tetris plus grouchy teens and tweens who would have preferred a weekend on the couch meant tempers ran medium-high. But on the road we got, and after a relatively uneventful drive (although we did see a fox sauntering across a field, as well as many examples of future delicious Alberta steaks enjoying their best lives on pasture) made our way to the camp site.  We all went into default mode with the kids getting their tent up then inflating everyone's mattresses, pitching pillows and sleeping bags into the right places while Terry and I figured out the new tent. The hammer went back and forth as everyone worked to pound the stakes in.  By the time everything was up and staked it was lunch time!

After lunch the kids had the commandment to do some hiking then they can read, play, or whatever else. Alex took off like a rocket, Zoltan decided he'd rather stay with the adults. And exploring we went.  Our goals were to climb hoodoos, take pictures, and - for Terry and me - get enough steps for our different step challenge teams to not be embarrassments.  We each ended the day around 18,000 so I guess we succeeded.  We also played a heated game of animal, vegetable, mineral where each of us managed the stump the other two. Zoltan's mineral was molybdenum, which just goes to show you that there is real education to be found in childrens' literature.

Over dinner the first night, we were discussing the major exciting features of the new tent and Alex mentioned the large entryway so I supplied the correct word "vestibule" but she didn't hear me correctly and though I said "vegetable" so now there is a "vegetable" half open to the world just outside the sleeping part of our tent.

The second day we were all sleep-deprived because camping is loud and light. We checked out a different section of hoodoos as well as the canoe launch in case we ever wanted to come back for a float.  We cooked hot dogs for lunch and with the value of hindsight cooked food was probably not the best idea for the hottest day ever (around 75 degrees Fahrenheit).  In the afternoon we could barely stay comfortable laying in the shade.  Then Terry had a brilliant idea: the concession stand. Dinosaur Park actually has a concession stand, cafe, and in non-COVID times a whole little museum.

We wandered over and everyone got various ice creams but I got a Slushie. Totally refreshing!

Feeling much better we lazed about until dinner and s'mores time. Having noticed the night sky the night before, we set the alarm to get up around midnight and spent some time stargazing (at least, those of us who awoke did so).

We saw numerous mule deer - a couple coming close to our campsite. We saw a robin's nest relatively low in a tree, low enough I could see the robin sitting on the eggs - the little head poking just above the edge of the nest. We saw a parent bird make many trips in and out of a hole in the tree by our camp site and when we got close we could hear the "cheep" of baby birds. No prairie dogs, which we have consistently seen in the mountains and never in the prairie. 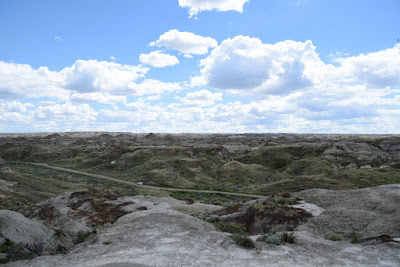