One of the birthday coupons the kids got last year was dessert for dinner.  Zoltan used his on something relatively mundane. Alex, on the other hand, came up with this gem. 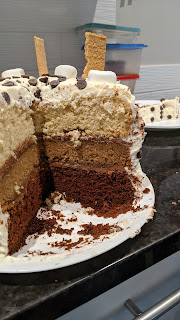 She and Zoltan each made cakes.

She made the chocolate and graham cracker cakes. Zoltan made a plain white cake.  He made chocolate chiffon frosting. She made marshmallow frosting. It consumed 2 containers of Fluff and still the "marshmallow" flavor got lost in "frosting" flavor. Next time it needs less butter and powdered sugar.

She stacked and frosted the layers.  She decorated the top and sides (Zoltan helped made some of the design decisions).

This thing is both amazing and terrifying. Our slices were about 1/16 each and it was too much. I was impressed how it all came together.  The graham cracker cake is the same recipe our chef friend had used when making Alex's birthday cake 3 years ago in Frankfurt and I doubted that Alex could pull off something as moist and flavorful. I was wrong. 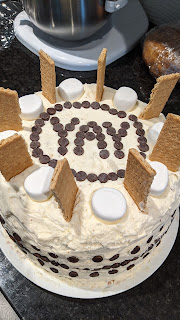 * Note: Terry had nothing to do with these photos