Being Jewish in Calgary

There is not a large, thriving Jewish population in Calgary. That became abundantly clear last year during the frustrating Hunt for Hanukkah Candles, where when I finally found some (thank you Michaels) I went ahead about bought enough for all three years. Last year I also made my own matzah, having given up on even searching for it.

This year i decided to do better research. After all, there are three different synagogues in the city, AND a JCC - although they are all within about three miles of each other in a part of the city far, far from mine.  The research turned up solid gold: there is one Safeway grocery store, down in the neighborhood of other Jewishy things, that not only carries Matzah but actually has a Kosher food section! 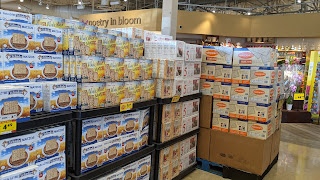 caveat: Terry did not take this picture and does not sanction its presence on the blog

Our pilgrimage took place this weekend. Upon entering the store we were met with this Wall O' Matzah,  and it only got better, with matzah meal for the matzah ball soup, or soup kits, or pre-made balls in broth in glass jars. Three kinds of horseradish.  Gefilte fish. They even had a full range of Passover candy.